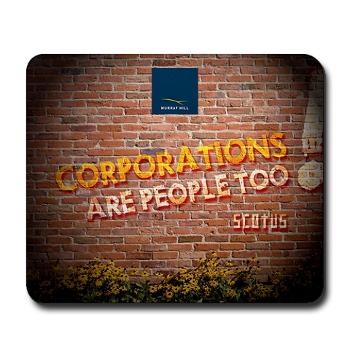 Murray Hill Inc. is believed to be the first “corporate person” to exercise its constitutional right to run for office. As Supreme Court observer Lyle Denniston wrote in his SCOTUSblog, “If anything, the decision in Citizens United v. Federal Election Commission conferred new dignity on corporate “persons,” treating them — under the First Amendment free-speech clause — as the equal of human beings.”

“It’s our democracy,” Murray Hill Inc. says, “We bought it, we paid for it, and we’re going to keep it.”

The campaign’s designated human, Eric Hensal, will help the corporation conform to antiquated “human only” procedures and sign the necessary voter registration and candidacy paperwork.

To emphasize its point, this liberal public relations firm will file to run in the Republican primary.