I’m not a writer. But you knew that. Let me add to your edification and elucidation. I hardly hand-write anything, outside of my signature on a credit card swipey thing. Which by the way, I have just come to making a squiggle that any sane person would recognize as meaningless. It’s all part of my plan to max out my credit cards one day using just the squiggle signature and then challenge them all.

“Not me… look at that signature… must have been a monkey!” 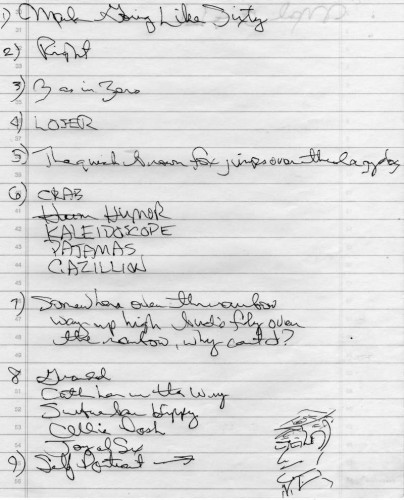 5. Write “The quick brown fox jumps over the lazy dog.”

9. Any special note or picture.

I’m tagging Grandad because I know they don’t allow him sharp objects and he will have to use a marker; Catch Her In The Wry, because she doesn’t have anything else to do before April 15; Suburban Hippie because the meme doesn’t contain the word; Hyperbole and a Half, even though I spelled her name wrong, it’s really Allie Raptor; Joy of Six because I bet she handwrites a lot! Probably even hand writes thank you notes; and Larry Wallberg only handwrites notes in the margins of books.