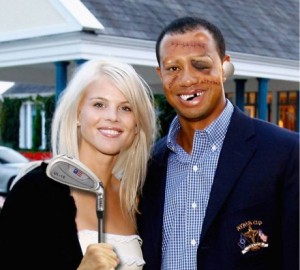 Tiger Woods had made losers out of many golfers during his career (which don’t forget started when he was two.)

But he also made losers out of just about anybody that his life touched.

Tiger Woods made his:

“It is not simply the degree of his conduct that was so egregious but the fact that he disappointed all of us, and more importantly our kids and grandkids. Our hero did not live up to the expectations of the role model we saw for our children.”

The only winner that comes out of this is Christine Brennan, the brilliant columnist for USA Today. Here’s what she said and what many are hoping:

“There is no way to know if the Tiger Woods we watched Monday is telling the truth, just as there was no way to determine how much he was lying all those years before. He lied to everyone then. Now he’s telling us he lied before but isn’t lying now. Let’s hope that’s true.”

Today we find out Tiger even made moves to poke his neighbor’s daughter when she was 21.

Tiger Woods has added to his list of losers – himself.

I hope he fails miserably at The Masters.  I mean, miserably! Shoot 80. Hit it in the water. Throw clubs, cuss and swear, refuse to answer questions.

That is the real Tiger Woods – loser.

Tiger: Did You Mean Bootyism?