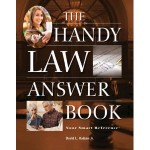 Denny Crane.
There isn’t much in The Handy Law Answer Book that goes much deeper than a season or two of Boston Legal, the television series starring William Shatner as Denny Crane.
I got this free book to review and it made me long for the good old days of Denny Crane.
The Handy Answer Book was written by David L. Hudson, Jr. who wrote or co-wrote 20 books, including such page-turners as The American Bar Association Guide to Credit and Bankruptcy, The Encyclopedia of the First Amendment and the Handy Supreme Court Answer Book.
Whuck?
Who needs those? But since the dude works just down the road at Vanderbilt Law School, the Nashville School of Law, and Middle Tennessee State University. I thought this Handy Law Answer Book was worth cracking open. Especially since most of Nashville is floating down the Cumberland River as we speak.
There probably is a section in the book on what to do if your private property is floating away. Pardon me, if I don’t research it for you.
This is an interesting book to have sitting on the shelf as a reference because it not only covers a short history of the U.S. legal system and some of the people who shaped it, it also covers topics that arise if you are a property owner, dealing with estates, personal injury matters, a dead-beat brother-in-law that owes you money, employment, or if the gummit actually has a warrant for your arrest and you want to study up on the criminal justice system.
If you don’t want to pick your lawyer from the Yellow Pages or television advertising (aren’t those personal injury commercials some of the absolute worst?) then The Handy Law Answer Book has some advice.
It will teach you how to demystify the legal language hodge-podge.
This is a great bathroom reader, even…or especially… if you have the Mad Cow. There are break-out sections almost on every page that deals with some quirk of the law.
Denny Crane: You hear the one about the fella who died, went to the pearly gates? St. Peter let him in. Sees a guy in a suit making a closing argument. Says, “Who’s that?” St. Peter says, “Oh, that’s God. Thinks he’s Denny Crane.”
Denny Crane.