I have a new hobby – at least until Sunday.

I am now the proud owner of a kayak. Since I’m in the process of tricking it out with the official sponsors stickers (like NASCAR) I don’t have a picture yet.

Suffice to say the title sponsor is … (sound of clarions here.)

Which will be boldly emblazoned on my kayak in a very prominent place and a bottle of Maker’s Mark will never be far from my reach.

Taking up a river kayaking with no experience may seem nuts enough. But buying a kayak with my friend Rick is like watching Carrie Bradshaw picking out shoes.
Now that is NUTS. 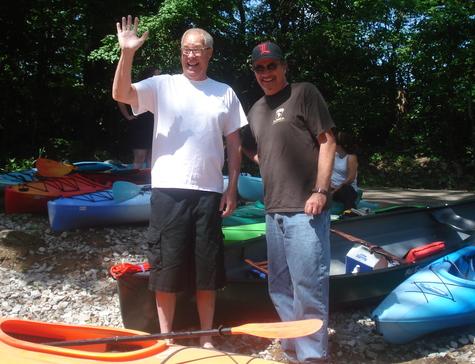 When I posted that comment on his wall, he responded “you mean I’m the Emelda Marcos of kayaks?” I told him “no” because she BOUGHT the friggin’ shoes.

Rick shopped me to death for a kayak on Saturday and Sunday and is still shopping.

My new kayak is in the garage, along with my personal flotation device (PFD), which used to be called a life jacket.

Rick and I decided we would go to the boondocks (very easy to do here) and watch the local canoe and kayak club shove off. (That’s us above on location somewhere in rural Kentucky with the sounds of banjos echoing through the flood debris.)

The first time I introduced myself, I referred to Rick as my “partner.” Quickly remembering the term has a whole new meaning, I blurted out “I mean my friend… the guy I’m with… I mean, we’re not married to each other or anything like that!”

Nice first impression, Mark. Insult The Gays and put doubt in mind of The Straights.

Everyone was extremely nice and helpful and they all shoved off leaving Rick and I bitten by the bug real bad. We looked at each other and said “why aren’t we with them?” And then we remembered neither of us had a boat.

The quest for the kayaks had begun. After a total of eight hours spread over three stores, two days, and countless websites,  I had a kayak, PFD, paddle and signed up for the next tour of Mammoth Cave National Park via river.

Rick had nothing, nada, zilch. He wasn’t even sure if he wanted a canoe or kayak. Sheesh.

I encouraged him, I cajoled him, I prodded him: “At least get a PFD and show me you are committed serious.”

He promised he would own a boat by mid-week. I have it in writing.

Since buying a kayak, I have discovered via Nancy that a bunch of guys have expressed to their wives a desire to take up kayaking. Eventually we will have a gang of geezers floating on  the river smoking seegars and drinking bourbon.  But as with most geezers they all have excuses for not being able to join me on Saturday.

Nancy was all for me taking up kayaking. Not sure if the thought of me being gone all day Saturday twice a month is appealing or she has her eye on an Alpaca or two.

Check back with me Monday, I may have a great deal on a kayak, paddle, and PFD.

Unless I can sell it to Rick.