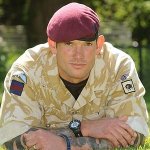 This is a picture of Craig Harrison.
He is a British corporal of horse.
He killed a guy from 8,120 feet away.
On purpose.

Now I ask you Internet.
What the hell is a “British corporal of horse?”

And setting that aside for a moment… can a man-held weapon really shoot 8,120 feet?

“The first round hit a machine-gunner in the stomach and killed him outright,”

“The second insurgent grabbed the weapon and turned as my second shot hit him in the side. He went down, too,”

Really? Would the weapon look something like this? Except the barrel would have to be bent upward to account for gravity and physics and all that stuff I never learned? 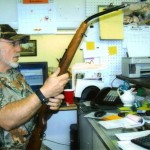 The most high-powered weapon I have fired is a .22 rifle at rats around the corncrib about 15 feet away.
No shotguns. No pistols.
I need to add that to my to-do list.
Shoot weapon.
Even better: Shoot bazooka.