I have identified a new language phenomenon that is sweeping the nation.

I mean, I’ve noticed that a lot of people – myself included – have started adding superfluous words when they talk. I mean, it’s not really a big deal since, like, most teenagers already have, like, you know, been adding meaningless words to their conversation for a couple of decades, dude, you know.

But, I mean, I’ve heard this superfluous phrase coming from people who would choke on the “like” or “you know” if it entered their conversation.

NOVA: Have you ever had doubts about string theory?

Greene: All the time! I mean, it is a very strange research career, in a way. So far I’ve spent something like 17 years working on a theory for which there is essentially no direct experimental support. It’s a very precarious way to live and to work.

Warren Buffet:
BUFFETT: I feel better. I mean, I love that investment because we have $5 billion in a preferred paying us 10 percent.

Greta Van Sustern used it nine times in her interview with Maverick:

What is your — meaning the federal government’s — problem? I mean, what don’t you get about it? You tell us, but you don’t do anything!

As usual, it’s the jocks that sprinkle this into their conversations most often, using “I mean” instead of saying Um, they are now saying “I mean…”

You know, I mean, I’m talking, finish my thought, but don’t want to stop running my mouth, so I say, “I mean…” and say basically the same damn thing again!

Or, (and this happens a lot with pundits) they will make their point and add “I mean” just to work in another sound bite.

I’m not talking about tautologies and pleonasms.

I don’t know what these words (“like”, “you know”, “I mean”) are called as a group. I mean I’m not sure if they have such a descriptive term like tautology or pleonasm. I have consulted Language Boy to see what he has to say.

He may email me, in which case I will update, or he may comment. I mean I’ll be sure to report back to you so that, like, you know, you can work this new definition into your conversation. I will be dropping tautologistic and pleonastic into the conversation at LeClub la Pony later today.

Don’t confuse, “I mean” with “know what I mean?” That’s was a cultural touchstone for us boomers. 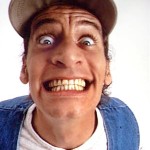 I mean, if this group of meaningless words has no etymology what are your suggestion? Know whut I mean?

We used to call those interjections, but now they’re referred to as filler words.