Because NBC has done so well with the spawn of Tim Russert, Luke, and the offspring of Dubya, Jenna Bush, CBS has snagged Massachusetts Republican  Sen. Scott Brown’s 21-year-old daughter Ayla Brown.  She has graduated from American Idol, but has yet to earn a college degree, to be a correspondent for the CBS Early Show. 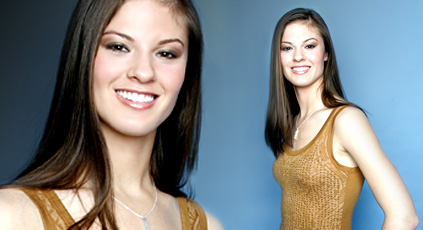 Ayla Brown is still a student at Boston College and from her qualifications, will  serve CBS News in a most capable fashion:

… she has sung “The Star-Spangled Banner” at dozens of events. The most notable venue at which she has performed the anthem was the 33rd annual Boston Pops Fireworks Spectacular on the Esplanade alongside Boston’s Charles River on July 4, 2006. The performance garnered national attention and was watched by hundreds of thousands both in attendance and on television.

CBS says they have the next Katie Couric in Ayla Brown…

“You can’t create the next Katie Couric,” executive producer David Friedman tells AP. “You just have to find talent that you think can develop into something.”