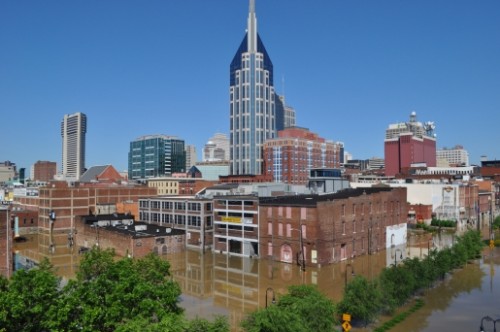 The “news” bloggers are freaking out that this isn’t getting the same national news coverage as the oil volcano or the flubbed up terrorist attack in Manhattan.

It is a disaster for NashVegas for sure and will have tremendous impact on a million or so people. But I live about 70 miles away and it has absolutely NO impact on my life. Ergo: not a national news story.

As a matter of fact, we will be going to the Tennessee Performing Arts Center tonight. TPAC is just a few blocks away from where the picture was taken.

Performances of “A Chorus Line” at the Tennessee Performing Arts Center will be presented as originally scheduled, May 4-9.

There is a meme developing about how NashVegas was ignored by the national media.

In one of the most shamefully underreported stories so far, the fatal flooding in Nashville, Tennessee, continues to get worse as the river approaches its crest.  The entirety of downtown Nashville had to be evacuated, including 1500 people from the Opryland Hotel.

Shamefully? Overstate much? BTW: Opryland Hotel is not even close to downtown, it’s at least 15 miles away. (Pre-flood, post-flood the parkway may be closed.)

The flood in Nashville and central Tennessee just isn’t as important on the national scene.  Shameful? Puh-leeze.

One blogger claimed the best source of information is the Nashvillest… which is just a couple of folks aggregating what other main stream (har)  media have published/broadcasted. It’s a local story and the local media outlets are going overboard (har) to cover the flood.

We’re looking at some of the worst flooding in decades, the interstates are closed, people’s houses are flooding, some cows are stranded, and it’s probably going to get worse before it gets better.

Cows. We have stranded cows. (Made the front page of Nashvillest.) The perceived lack of national media coverage was explained this way by a blogger…

Part of the lack of national response for Nashville may come from the lag between the real time web and when traditional media figures out there’s a story.

“Traditional media” had this story from the first flooding.  The NashVegas Tee Vee station we get here in Smallburg was wall-to-wall even though their newsroom was flooding and equipment was being moved to higher ground.

Am I affected by oil volcano? Yes, gas prices have already jumped by 15 cents a gallon. Taxpayers will be shelling out to clean up the BP oil volcano. Commodities that move up and down the Mississippi river will be curtailed, thus causing shortages and higher prices.

Does Firecracker Boy in Manhattan affect me? Probably not as much – yet. But the next time we fly anyplace, I expect to see increased security.

Flooding NashVegas is a local story. And the bloggers and tweeters are just regurgitating what the television stations and newspapers are reporting.

UPDATE: Adding to the insult – Tornado Penis aimed at NashVegas is getting lots of attention from web but not mainstream media. 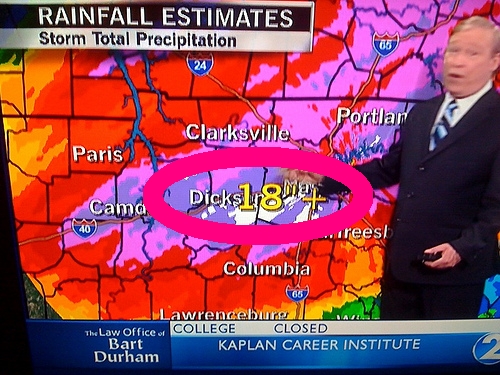