If CBS can come up with better title than $#*! My Dad Says based on the one joke twitter stream of @shitmydadsays, they will have a hit on their hands – at least with the “coveted” 18-34 male demo.

I have some thoughts. 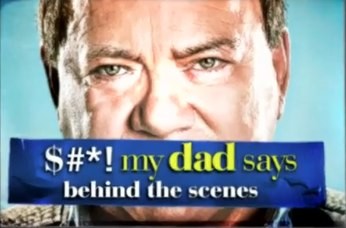 First, the concept: Random comments a 74-year-old dad says to his 29-year-old son still living at home who then posted select comments on Twitter is the basis for this sit-com. William Shattner plays the super-geezer. Yes, a sit-com based on curmudgeonly man making smart-ass comments to family members.

How many OTHER sit-coms can you think of based on this premise? (In no particular order…)

And that’s just a few I can think of off the top of my head.

This type of sitcom has been done TO DEATH.

Third, the content: @ShitMyDadSays is funny because it’s profane. Profanity doesn’t usually do well in primetime.

A group that wants to protect us from making our own choices on what is on the airways owned by the public, is already having a shit-fit.

“We’re talking here not about a Twitter feed, we’re talking about broadcast television that requires a license to use the airwaves,” Winter said. “There are an infinite number of alternatives that CBS could have chosen but its desire to shock and offend is crystal clear in this decision.”

Hard to argue with that last statement. CBS surely is airing $#*! My Dad Says just to shock and offend.

Sex and violence does really well in prime time. But profanity is getting a foot-hold, and if anyone can sneak in a “shit” or better in a sit-com, it will be William Shattner.

Fourth, Tee Vee writers are just bat-shit crazy to work Twitter into their dialogue so the characters seem current. To be able to write a whole season Tee Vee based on a social network that a huge majority of people don’t care about, or use, is the epitome of Hollywood self-indulgence.

Sixth, $#*! My Dad Says isn’t funny. It’s predictable. Watch the preview below. Compared the tweets, it is just so lame. (And you know they have pulled the best lines for the promos – they always do.)

Shit Denny Crane Says would be much funnier.