This is actually an off-road racer, but the action is the same whether or not the car is on gravel or asphalt or snow or ice or rain.

Drifting is driving so the your backend wants to pass your front end.

I learned to drift on a dirt go-kart race track a neighbor carved out of an alfalfa field for his kid. He put banking on the track and everything. After one summer of running our go-karts on this track, we had dislodged all the rogue alfalfa and ground the coarse dirt up into fine granules of soil.

It was an oval track and when we hit the corners, we would throw rooster-tails of this fine red soil. I recall my Mother saying one day she looked out the kitchen window toward the track and all she could see was a rising cloud of dust.

That’s probably the same day I came home a nice even shade of light brown from head to toe, only marked by streaks of darker brown where sweat had created tiny face ditches for drainage from my hairline.

Later, I moved drifting activities to the field behind my house where I fired up the 1949 Studebaker Land Cruiser with a six cylinder engine, my Grandpa gave me when I was fourteen. 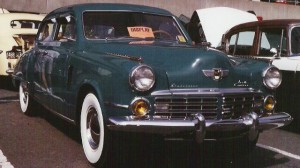 My next experience with drifting was after I actually had a driver’s license and could get on the gravel roads that ran near my hometown. There wasn’t a curve taken that the rear end didn’t try to pass the front. Unless there was somebody coming the other direction.

I still like to drift. I bought a rear wheel drive car just so I could relive those memories. No gravel roads around here, so I drift on the ice or snow or rainy-wet.

You are aware that the best asphalt drifting is done right after a slight shower, right?

The oils put down by a week’s worth of traffic underneath a slight sheen of H2O is perfect for hanging out your rear.