The summer solstice is upon us. June 21, the first day of summer.

I decided to take the day and trek down to the Barren River to see if it still was Barren.

It is – I can personally report that the river is devoid of all fish-like creatures. Only turtles and cattle inhabit the Barren River.

My paddle buddy, Rick and I did the trip on Saturday. 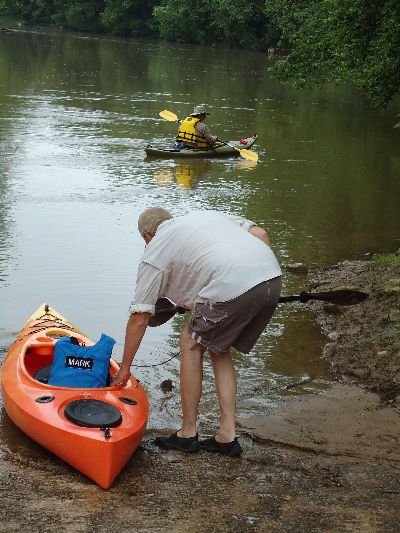 I know I look like an infirm geezer, but when my butt hits that kayak, I am a paddling floating fool.

I had originally scheduled the first day of summer to be spent on the river that flows through Mammoth Cave National Park. But my paddle buddy for that trip pooped out.

Rather than skip spending the solstice on water, I had Nancy set me adrift on the same stretch of water that Rick and I did on Saturday. Any water voyage worth doing once, is worth doing twice.

Did I mention the weather forecast for the Summer Solstice? Check this: predicted high of 100. Yup, great day to be on the water. It was amazing how much cooler it was where I am standing in the picture, compared to our back yard.

Rick, Mr. “Old Man and the Sea” (he is a former Coast Guard Search and Rescue dude) loaned me a fishing pole and even made up a little tackle box full of lures.

My intention was to just bait a hook with worms and let it go at that.

But once Rick put all those pretty imitation fish food thingies at my disposal, I scratched the worms.

My adventure craft left the boat landing at about 10 a.m. I am pleased to give you this Barren River Report:

I took my cell and told Nancy it probably would be about a four-hour float and I would call when I was ready to be picked up. Just as I was heading ashore to relieve myself of Mountain Dew, she called. “Any idea how much longer?”

As I stood on the bank of the Barren River raising the water level by 36 oz, (3 cans of Dew’s worth) I wondered what all those creatures that were scattering beneath my golden shower were thinking.

Two hours later, I spotted the take-out and gave Nanc’ a call. I estimated by float time at an hour. She said she was waiting for me already and had been since the first call. Give that woman a Nook and I think she would have waited ’til dark.

Ten minutes of furious paddling had me at the boatlanding.

The Summer Solstice journey was complete. The Barren River is still Barren. I returned home to mow the lawn and life has returned to routine, but Rick and I have our Saturday Paddle planned.

As Paul Harvey used to say “Stand by for NEWS!“