If I knew that dropping 75 pounds would make me invisible to people I have known for the last 15 years, I would have supplemented my income by robbing banks before losing the weight. 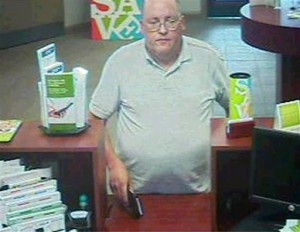 Check it out: this guy  robs banks across the south for months and the FBI doesn’t have a clue where he is. If he is smart, he is dropping the weight, because when I did I was able to walk right by people and not have them recognize me.

The FBI is calling him the Granddad Bandit because they say  it helps law enforcement officials if there is a clever nickname attached to serial bank robber.

Remember Baby Face Nelson? Pretty Boy Floyd? Bugs Moran? Never mind that those dudes were active decades ago, the FBI can’t seem to move on, so Granddad Bandit it is.

They are offering $10,000 reward for the Granddad Bandit’s arrest.

As if that doesn’t describe every white geezer in America! The only thing they didn’t add was “last seen at Wal-mart.”

To make citizens aware the FBI is pulling out all the stops to arrest this vicious geezer, they are putting up billboards in Missouri with his picture.

Yeah, that will help! Maybe Homeland Security needs to put up  Osama’s picture in Afghanistan.