When I started kayaking, a lot of the appeal was that there are six rivers within 30 minutes of my house. The local university has a fine map marking the rivers and suggested “put-in” and “take-out” points.

Kentucky has a nice law that says any Kentucky waterway may be accessed underneath any bridge. In addition, the county has invested in some boat ramps and parking areas for put-ins and take-outs.

Only a few are “poor access” according to the students that used their parent’s money to float the rivers.

In university-student-speak, “poor-access” means: “Big Effin’ Cliffs on Both Sides.”

I thought I would try the GG – G trip on the map.  Simple enough, put in near Lock #4 on the Barren River and float to the boat ramp in Smallburg. 9 miles. Piece of cake. 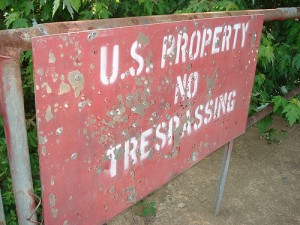 This sign doesn’t apply to me.  I promise. Posted within earshot of tempting roaring water and Lock #4, but not within eyesight of any water. Since the boat ramp in this area was on the wrong side of the Lock #4 and using that as a take-out would have meant certain death, I followed the two fisher-people (is there a better gender neutral term?) that were about a 100 yards in front of me. 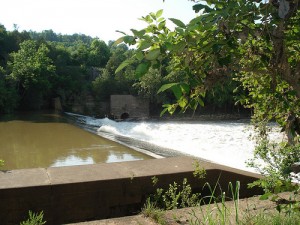 (above) What’s left of the dam formerly used to operated Lock #4, aka “Certain Death to Kayakers.” I had no choice, I had come too far not to find the perfect take-out upstream from the lock and dam. 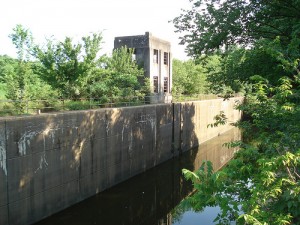 I forgot to mention that to view the river, it was necessary to walk on the top wall of the lock. It was about two feet wide and aside from the thirty foot drop to the water on one side and muck on the other, it was a routine walk in Jurassic Park. 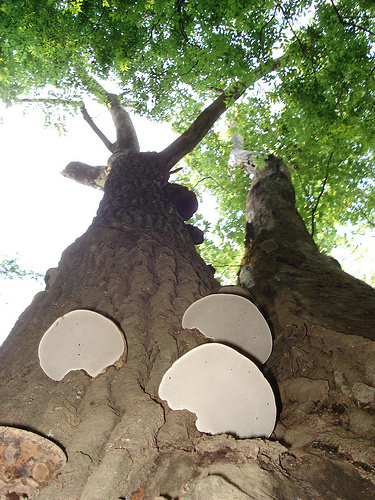 After traipsing 1,100 yards (yes I counted) and encountering every pest known to man, deer flies, horse flies, mosquitoes, ticks, snakes, rats, zombies,  and some really scary trees, it dawned on me that this was a very bad idea.

I am such an adventurer.