Catch Her in the Wry wrote about her addiction to Coke and longed for the good old days when Coke came from a coffin.

where you pulled out the bottle, dripping with condensation, popped the cap on the built-in opener, and took a swig on a hot summer day. There was nothing better than the burn of that first sip.

Yup. Me too. Except for the addition part. I have cut way back on Coke and tea because they stain my teeth so bad. I’ve gone to the white drinks: Sierra Mist and 7up or the yellow drinks: Mello-yello and Mountain Dew.

All diet drinks of course (more on that later.)

My dad had a Coke machine at the mill and it was my job to keep it filled. 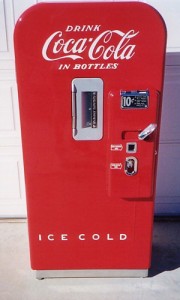 It looked like this, but I’m pretty sure it was 5 cents back in the ’50s. It dispensed those little green bottles of addiction via a giant wheel. Pushing the lever rotates the wheel and the bottle appears behind the little door-in-the-door. The design was pretty ingenious because the holes were offset enough that the second bottle was insight but not within grasp.

I always kept a dozen or so bottles in the very bottom so that when I refilled it, a hot Coke would never be sold. Coke – only Coke – was in the machine.

I stacked crates of empties  somewhere else for The Coke Guy to pickup. Sometimes I  pee’d in the bottle just to be ornery.

Coke also was part of my after school routine. The school bus stopped in front of Shenefield’s Standard gas station. Very similar to Wally’s in Mayberry. There even was a pit in the back of the station where a car could drive over so the mechanic could climb down a ladder to do service.

Lloyd’s dad sold 16 ounce bottles of Coke. He would open them and hand them across the display case of cigarettes, cigarette papers, chewing tobacco, cigarette lighters, cigars, Sen-sens, and other traveler essentials.

We would chug about half the bottle and then burp our way out the door.

He put in a coffin type cooler and we could shove in our coins and help ourselves to the smaller and more expensive Coke.

When the neighborhood gang could stay out later, we would ride our bikes down to the truck repair place that had a vertical pop machine that was outdoors.

With a glass and bottle opener in hand, we would pop the tops and release the bounty within to flow into our glasses. The only disadvantage was there would only be two rows of Cokes. That meant in our gang of four, the first two to arrive in the dark of night would get the Coke. The other two would get Royal Crown.

Of course, we drained and drank all the bottles – even the Hires Root Beer and Faygo Orange.

Damn, we were a devious bunch of punks.

K8 has a scary post about the horrible side-effects of artificial sweetener.

Crisps, diet (‘zero’) drinks, chewing gum, diet yoghurts, artificial sweeteners, breakfast cereals, aspartame, aspartame, aspartame. It’s in sugar-free children’s medications, in a bid to prevent tooth-rot. It’s in 1200 of the products you consume, and it’s very slowly mucking up our genetics and making us say things like… ‘isn’t it funny how people are dropping like flies with cancer these days?’

Thank you for reading.

Now forget about it and have a Coke and a smile.