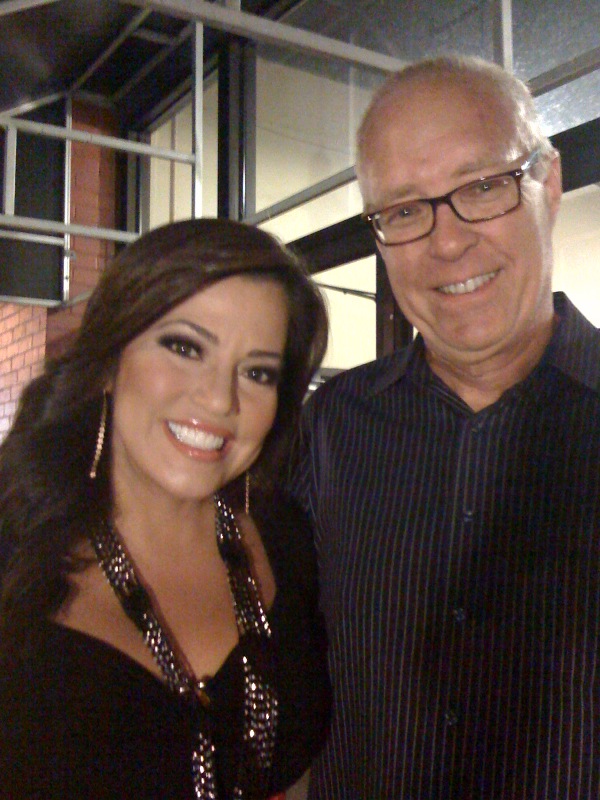 We go to sleep with Dave Letterman and wake up with Robin Meade.

She is my new best friend.

Waking up with Robin Meade was my idea. I don’t use an alarm clock, so I wake up anyplace from 6 a.m. to 7 a.m. depending on the several trips I made during the night. (No, I don’t need Avodart, I just need to cut out eating watermelon at 8 o’clock!)

Robin Meade is anchor of HLN Morning Express with Robin Meade. HLN used to be called Headline News and is part of CNN. My fanhood goes back to when the program was  Robin and Company…

What I love about Morning Express with Robin Meade, is that basically every 15 minutes they are repeating the news headlines. So I can get into that early morning half-asleep, half-awake, and hear Robin do one or two stories, I will fall back to sleep and wake up to maybe the same stories, or others.

Just one complaint, Robin doesn’t tell me what time it is. She comes out of the breaks with a “Mornin’ sunshine!” (that’s her tag line and name of her book.) If she would just mention that every fifteen minutes it would save me from having to roll over and look at the clock.

Having been a big fan for a long time, I was excited when she announced via Twitter @robinmeade that she would be taking a vacation to write songs, record songs, and perform songs in Nashvegas.

I could see her in person!!! Nirvana.

Friday night, I had my chance. Get this! At 8:30, we’re standing outside the Listening Room Cafe where she was going to perform at 9 p.m. (review and background at link) and she comes walking up the sidewalk ALONE.

She is just stone-cold beautiful.

I greeted her with the geezer equivalent of a squeal.

She only hesitated a beat before she sized me up as harmless and came up to shake my hand.

Then – THEN – she stood there and made small talk with me. She was so impressed that we came “all the way from Kentucky” to see her “sing two songs.”

Yeah, seems the guy that owns the place, who I talked to about best seating, either…

Little did he know, I would have paid a cover charge to stand on the sidewalk and peep in the windows.

Since my daughter is about her age and used to be a news anchor, I tend to know more about the Tee Vee biz than most fanboys.

“Are you a news director or something?”

She decided she needed to go inside to make her contacts and we parted company. Wait! Wait! It get’s better. OMG! OMG! As I come out of the bathroom, her husband is standing there in line. (I remembered not to shake his hand.)

I made some small talk and come to find out, he knows where Smallburg, Kentucky is.

Yeah, it’s the only place he got a speeding ticket.

We found our table and settled in as I watched Robin Meade move around the room trying not to look to stalkerish. (It didn’t work, Nancy said I looked like a little puppy following her around.) I did NOT follow her around – except with my eyes.

Then – THEN – she came over to our table and said she wanted to tweet about us.

Yeah, she was happy we were there.

Wait, it get’s better (he said breathlessly in his OMG, OMG, OMG!!! voice)

She did her two songs… then – THEN – came to our table and asked about our dogs  (she has Rocco and Reese) and Nancy’s hand surgery, introduced us to her college dorm-mate, and then – THEN – asked US about her performance:

She wanted to know if we could hear OK, and was she in tune?

Was she in tune? Look at that face! In tune? Who cares? She does, but I sure didn’t.

She was gazing at me with those big brown eyes. Despite that my tinnitus was roaring in my head still from the Adam Lambert concert Wednesday and I couldn’t hear much of anything, she asked me if she was in tune.

“Uh huh,” I nodded, “sounded great, you were wonderful” (or words to those effect.)

OK, I have a daughter that is the same age.

Robin Meade is my new best friend. That’s my way of saying I still have a crush.

And she did nothing but make it worse.