Deer whistles, little gizmodos that we’re supposed to shell out good money for to protect our massive, well-insured, Mad Max, road chewers, from smashing into Bambi, are back! 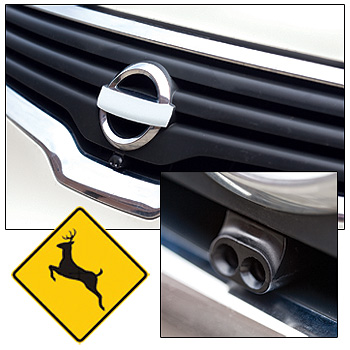 I remember the first time deer whistles were popular. It was about the same time that geezers were adding a daytime running light to the center of their car grill to alert oncoming motorists that a car was heading toward them. The car makers liked this so well, they lobbied NTSA to have running lights be mandatory. They then jacked up the price of cars by a few hundred bucks.

Gearheads about the same time started adding an anti-static strap to hang beneath the car so it didn’t spontaneously combust from all the electricity created when the rubber meets the road.

Deer whistles didn’t work then. They don’t work now, but all those Volvo-driving eco-freaks will rush out to Sharper Image and spend $89.00 to protect the wildlife.

Except deer whistles don’t work. (Did I say that already?)

“We tested them strictly from an acoustical point of view,” explains Scheifele. He found that the whistles typically produce a signal either at a frequency of 3 kilohertz (kHz) or 12 kHz. Both, as it turns out, are problematic.

The hearing range of white-tailed deer, the most common species in the United States, is between 2 kHz and 6 kHz, so the animal is not capable of hearing the 12 kHz signal.

I have a carburetor that gets 500 miles per gallon, but Big Oil is paying me millions to keep it off the market.