My good friend Esther from Skyhorse Publishing sent me the galley proof  of book that she thought I needed to take a look at.

It’s called The Cigarette Book; The History and Culture of Smoking.

First page I open defines the lighting one cigarette from another. Not chain-smoking, but using somebody elses cig to light up.

I was warned not to quote from the book until it releases. So just trust me, they have documentation of this.

I haven’t read The Cigarette Book yet and I may never read it from cover-to-cover, because it is an “encyclopedia” for cigarettes. It is a great bathroom book, I can tell that already.

BTW: I always know how to spell encyclopedia because of Jiminy Cricket…


You know how something will pop to the top of your mind and then it seems to just grow? It’s that way today with cigarettes. Usually the only time I read about cigarettes – and more directly, smoking – is from this buzzard. Today is only 4/9 over, I’ve read this:

Some researchers scoured YouTube and found that cigarette makers were behind a lot of videos uploaded to the site.

It’s been nearly 40 years since cigarette advertisements on television and radio were banned in the U.S., and earlier this summer new regulations went into effect prohibiting tobacco companies from sponsoring events, but now the tobacco industry may have found a new, unregulated medium to advertise on – the Internet.

Times are tough in Cuba: Raul Castro has been cutting back on government handouts in Cuba until the U.S. casinos are built and Americans can start shuttling our green-backs to him.

For years, Cubans over the age of 54 received rations of the necessities of life.  Chickpeas, potatoes, and sugar rations were cut out earlier this year.  Now, to add insult to injury, elderly Cubans no longer receive their four packs of free cigarettes every month!

The U.K. is really struggling with the issue of cigarettes and smoke. According to Velvet Glove, Iron Fist, they have started down a slippery slope (the U.S. is about half-way down already.)

The case of cigarettes offers a possible example. Some nations have gone from modest warning labels to much more aggressive information campaigns to high cigarette taxes to bans on smoking in public places, and a smoker would not have to be paranoid to think that the day might eventually come when one or another nation heavily regulates or even bans cigarettes altogether.

And then there is this bit of pap: Twitter can help you stop smoking. 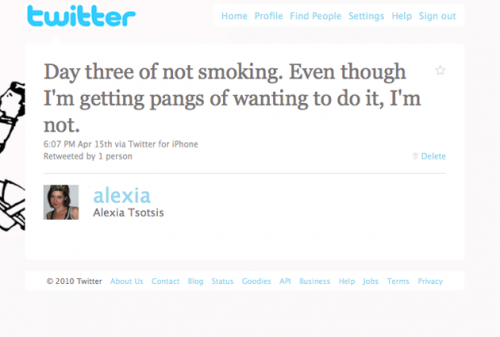 On my birthday this year, I decided that 15 years of smoking were enough and tossed cigarettes. I didn’t tweet about it at first, mostly because I felt really sick from nicotine withdrawals –- but on day three I mustered enough energy to pound out the above missive.

Amazing, right? I didn’t go searching for these items, they just appeared the past hours in my normal RSS reading. I will know more about cigarettes by the end of the weekend than you can shake a tobacco stick at.

I know this already, slippery slope or not, cigarettes should be banned. They are the only legal product sold that when use as directed are addictive and cause disease and death.

And soon, I will bring you more entertaining facts about cigarettes. Like