J.D. at I Do Things has a great theme for a blog and she does a lot of things so I don’t have to…

So then there was that time I was covered in tar.

Oh, you want details. Well, you would.

Nancy and I were feuding about the amount of time I was spending on the river. As a result, things were frosty at the old Conclave ala Kayak. We weren’t speaking.

This means I lost my best adviser and counselor to save me from myself. Things thawed after a day and we resumed our normal lives: she had Bunco last evening (earlier this night).

I decided it would be a great time to broil my butt.

A great coupon for tanning I did boast,

My kayaked skin was as brown as toast,

Bajan folks would soon be our host.

Into the local tanning salon, I did coast,

With my skinnier ass as white as a ghost,

And therein lies the tale of my roast…

Earlier, during our break in day-to-day conversations, I got a great deal at a tanning salon. I’ve never been to a tanning salon. I have a nice overall tan this year and it would be nice to hit the Barbados beach without my normal golfer’s tan.

Normally I would consult Nancy and perhaps even she would have indulged and gone with me, guiding me through the SOP’s for technology tans.

I had a Kayaker’s tan. I usually only wore a bathing suit while yakking in the river. (And yes, every time I would pull my shirt off over my head after we were on the river, Kenny would say “My eyes! My eyes!” Every. Single. Time.)  But since other guys were doing it I felt it would be OK, even with moobs that just won’t go away no matter how much weight I lose.

When I met Cassy at the front desk of the tanning salon, she was very helpful – by that I mean she didn’t bust a gut laughing when I said I was a virgin when it came to tanning beds. OK, I didn’t actually say virgin to her, I said it was my first time.

She was young enough to be my grand-daughter and I played on those feelings.

Do you want me to go back with you to explain how it works?

I did all that. As I’m lying there I’m thinking, this is kinda pleasant and recalled the days on the Beaufort beach. Then it dawned on me. I’m naked. This is a tanning bed. There are parts of my body that have not seen the sun except for very brief “pit stops” along the river. Draining the snake, if you will.

Holy shit! I grabbed my package to keep it covered. It took both hands!

There was no way I could cover my ass at the same time.

You know how a sunburn doesn’t hurt until a few hours later?

My ass started burning a couple hours ago.  Not the kind of burning you get from too much Thai food, my cheeks are on fire!

Sleeping is not an option – lucky you! I Broiled My Butt So You Don’t Have To.

Since we’re talking about my ass, let me update you with my new favorite toilet graffiti… 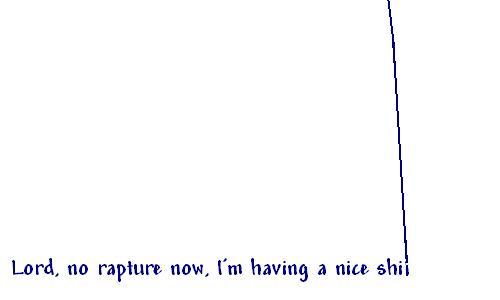 But don’t worry about me, I’ll be fine. I took a couple Ass-burn tablets and will await the sunrise.