There is a video of a girl throwing puppies into a river.

The video below really is disturbing, so only watch it if you want to lose your faith in humanity, have nightmares, …

is the way one news site reports on the video.

Here is a link to is known so far about this heinous act.

There is a bunch of wild-eyed forum users that hang out at 4chan.org (OK if you peek at it, but don’t even think of engaging anyone on the forums) who first discovered the video and are now leading the pack of vigilantes out  to find out who she is and (at the very, very least) throw her in the river.

The commenters are reacting with more vitriol than you can imagine.

I haven’t watched the video. But from the screen grabs and from what I have read, she is young (12 years old?) and Eastern European (Bosnia, Croatia?) 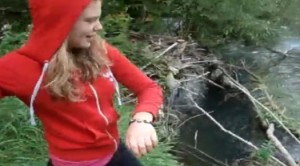 Commenters are writing some ultra-weird stuff about what they would do to this young woman if they had their way.

Now thanks to a very wealthy Hollywood type – Transformers director – Michael Bay has made it very rewarding to hunt down the girl.

“There is a disturbing video going around the news outlets. It’s a video of blonde young woman in a red sweatshirt casually tossing squealing puppies into the fast-moving river one by one.

Michael Bay has informed me that he is offering a $50,000 reward for information leading to the arrest and successful prosecution of the woman in the red sweatshirt and the person who shot this act of cruelty.”

OK, fine Michael, now you have done it. Now you have unleashed the world of wackos to make it worthwhile to get off their butts and actually go find this person.

And to what end?

There should be outrage.

But it should not be strictly focused on this one action by one individual. The actions of people who raise chickens to fight, dogs to fight, and breed dogs for profit – puppy mills should be the target of real outrage.

With that said, if the 4chan gang targets me, they can take me down. I’m prepared.

I’ve got some bunnies to kill.

UPDATE:
(AP) SARAJEVO, Bosnia-Herzegovina – Police in Bosnia say they believe they have located a young woman shown in a video throwing puppies into a river. Police in the central Bosnian town of Bugojno said Friday they have found the girl they suspect is seen on the video killing six newborn puppies by throwing them into the river one by one.