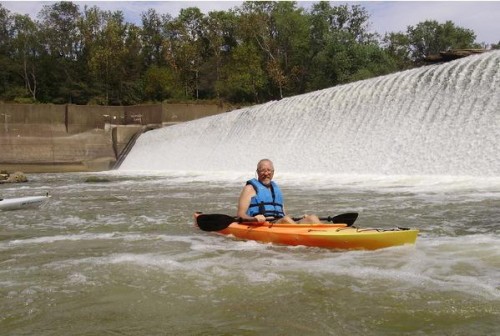 I gave into peer pressure to my fellow kayakers on Saturday.

As opposed to Piers pressure to which CNN gave in.

Aside: And before we go any further, what is the female of fellow? Femellow?

My fellow and femellow yakkers put a high pressure on me Saturday and I bowed. I should have been more stern.

I like to go with the flow, (I should have been a urologist) not create waves (not good with oscilloscopes) , be laid-back (as in reclining).

One of our earlier kayak trips was a two-mile paddle upstream to the confluence of two rivers and then down stream to the put-out.

Another aside: Yes, this is going to be crammed with as many bad puns as I can manage.

After my first experience going against the flow, I promised I would never go upstream again. We have been without rain for a while and a lot of the tributaries are dry. It’s like going from one ex-stream to another.

I should be paddled. Rapidly.

I gave in to Pier One pressure. (That’s the pressure I feel upon entering the store because I am not a hipster. I am a kneester. My hips are fine – tyvm. A kneester is one who has had a knee replacement. My daughter had a friend named Kuester… yes pronounced Kee-ster! I think she was afraid to leave town because there was a chain of hardware stores named the same thing, and we never gave it another thought that her name was synonym for ass.)

Currently, I am recovering from another dam adventure river voyage. It was a renewal. A River Phoenix.

Yeah, I know, if we were in the Ukraine you would Crimea river.

The Live in Fear weather forecaster called for a rainy day (every day in a kayak is a wet one – insert your own pun here). But we got high and it was a sunny morning.

The organizer for the trip was Matt who described it this way:

We’ll paddle up-stream to view the lock and there are two side creeks to explore if the water level is favorable. This scenic section of Green River is highlighted by a paddle under a large natural rock arch. This is a 8 mile paddle that should take about 5 hours.

Our nomadic tribe will  settle for this current leader until we  find a Bedouin.

We had a great time as usual. One of our beavers died and was scene floating downstream. Fortunately for us it wasn’t the human fellow kayaker, Mr. Beaver, it an animal. Both have a distinct odor as we passed.

As we were breaking on a rock island, the dead beaver caught up with us. Matt observed that we are a sad bunch when a dead beaver was making better time down stream than we were. Travel tip: If you need an eye doctor on  Alaskan island make sure you see an optical Aleutian.

I prefer to take breaks in the south of France because there is nothing Toulouse.

The rock bluffs were just amazing reaching from water level to 20-40 feet. I was feeling boulder than the rest, so I stopped and answered the call of nature (#1). I was very careful. You know he survival rate after a fall into a deep hole is abyssmal.

Dam! Succumbing to peer pressure can be fun!

30 days to Barbados. I can’t wait. Salt water puns are a bunch abalone.