George Clooney solidified his spot as one of my favorite actors with his somber character in “The American.” His role was a big departure from his normally playful, smirky, lady’s man to a sober, cold, killer.

One would think I would have loved this movie. I didn’t. I would give The American 2 1/2 stars out of four. If some of the character casting and plot lines wouldn’t have been so contrived this could have been a three star or better film.

Clooney is a gunsmith. His clientele is limited and he trying to be killed by the Swedes while he builds a gun from left over Italian car parts.

When I complain that a movie fails because it’s not logical, she always takes me down with “it’s just a movie.” But I argue back, “but it was a story first.”

Here are the fails.

1. With all the specialized weaponry made and available at any southern gun show, why is it necessary for him to build a weapon from scratch?

2. The assassin he is building the gun for is killer beautiful. Not just attractive or good looking. She is hummana-hummana yummy.

3. George gets his loving from a whore in a tiny mountainside village in Italy. She is gorgeous too. C’mon. If she looked like Kathy Bates, well OK, but… she looked like this… 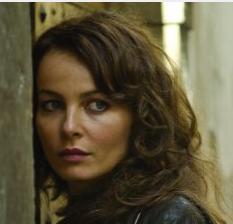 4. The weapon he builds comes from car parts he scrounges from a mechanic in the small Italian village.

5. The local priest fathered a bastard.

6. George falls in love with his whore.

7. He wants her to runaway from his life of murder and gun-building forever.

One thing that seem to be far more realistic than most spy thrillers. When George sees someone trying to kill him, he kills them first and anybody that was a witness. There is no dialogue or tet-a-tet. George gets the drop and bang, they are dead. He shoots people in the back, he shoots them – a lot! He is Raid. Kills ’em Dead.

I want to go to Castel del Monte, L’Aquila, Abruzzo, Italy – no not looking for Violante – to see a mountain village where every home is attached to each other and the mountain by terraces and sidewalks.

No front yards. No street lights.