I felt sorry for Jack DeCoster – the farmer that was called to testify before Congress because his chicken farm was the source of the Sam and Ella disease.

Yeah, he did a lot wrong on his farm, but talk about a man out of his element. I guess he was supoenaed so he had to show up, but to watch his testimony was painful.

The guy runs a corporate farm. It’s like calling the CEOs of the auto companies in to testify about an auto recall. They don’t have a clue why or how it happened. They just depended too much on others and trusted them.

It happens in business. Sometimes people lie to the top guy.

So about Wright County Egg factory… the farm run by DeCoster. His dad died when he was a teenager. His legacy was a few hundred chickens. Jack now has a factory farm that has over 15 million birds.

I read recently that in order for a factory egg farmer to break-even he must feed a million chickens.

Some people got the trots and had stomach cramps and loss of stamina. BFD, they will get over it. I like Jack.

There are a lot of lunatics running around crying fowl over having that many birds crammed into cages with nothing more to do than eat, drink and lay eggs. 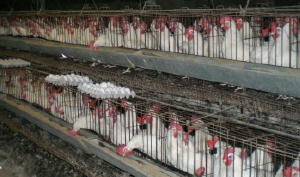 My summer job while in high school was delivering feed to chicken factories. I’ve been inside. You know what? There are chickens in there! Yeah, chickens, not small children. Just dumb-ass chickens. So what if they are crammed into small cages? They eat well, are healthy (because of the meds my dad mixed in with the feed) and get plenty to drink. They never get wet or have to run from a predator.

OK, it really, really stinks, but everything has its price. Free room and board and medical care with an odor? Sounds like the VA. 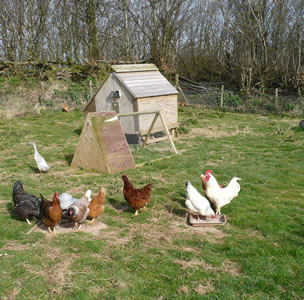 Yum, gimme some eggs where the hens can eat their own shit and stinkbugs and have lice.

Nancy mentioned the other day that the Knit-n-Bitches were talking about raising their own chickens. I could get into that! Not because of the free range deal, but because it would go well with our cotton and banana crops. If a cat or coyote killed a chicken, no biggie. It’s not like chickens wag their tails and look loving at you when you come home with the groceries! 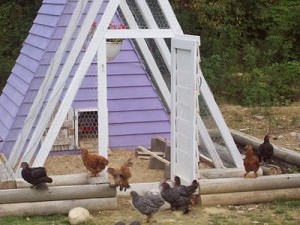 Isn’t that a cute chicken coop? I’m smart enough to build that! I wouldn’t paint it that gay blue. I would paint it red and put a “See Rock City” and “Chew Red Man Tobacco” on either side.

We’ll put it right next to the Alpaca pen. 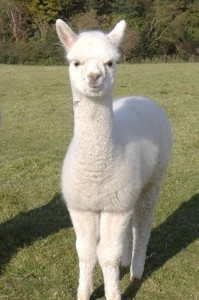 UPDATE: That is an alpaca, not a llama. And this just in… here is the Coop to beat them all… 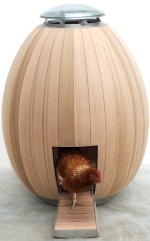