First comes the magnificent truth that anybody under the age of 25, doesn’t know what KFC stands for…
and certainly don’t recognize this face as being attached to the brand formerly known as Kentucky Fried Chicken.

On the 120th anniversary of Colonel Harland Sanders’ birth, the company that he founded has discovered a little more than half of young Americans think he was made up.

The revelation has led KFC to try to raise the dead with a campaign meant to reacquaint people with the man behind the chicken.

Now, YUM! (the parent of KFC) has decided to send the brand to the asses. Not the masses – the asses. Thinking on top of the buns, getting cheeky, putting the brand on behinds…

If you are a cute co-ed with nice firm buns, ( no XXL need apply) you can earn while the guys ogle your ass.

KFC is paying women at various college campuses across the United States to wear red sweatpants with the KFC Double Down logo and the iconic Colonel Sanders portrait logo.
The chicken restaurant chain said it will select certain women to serve as “human billboards” and pay them with $500 stipends and KFC gift checks. 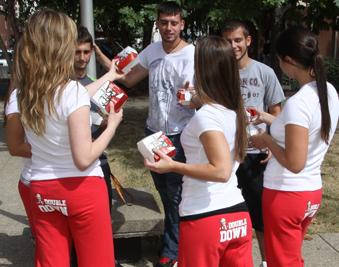 Yes, Harland Sanders Double Down on your butt.

No, that won’t draw unwanted attention or crude comments.

Next up: Tee shirts!  What would be the totally inappropriate KFC slogan on a woman’s chest to appeal to young men?