A post office in Cape Coral Florida got a bad rating from a mystery shopper.

The manager of the branch decided to make light of the poor rating by making a poop-like cake for the postal workers (love the toilet paper, and is that a toilet seat lid?) 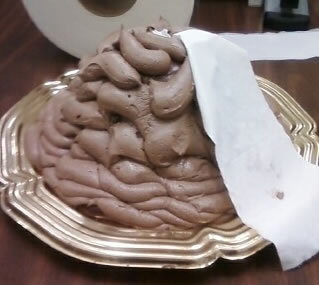 The postal workers could have 1. thought it was funny or 2. got mad. As the anchor in the video says in story… they chose #2.

The US Postal Service totally wimped out on the deal and supported the union and their lack of humor.

“This unfortunate incident demonstrates poor judgment on the part of the responsible party, and does not represent the professionalism of postal managers in the local community and across the country. The Postal Service apologizes to employees who were offended.”

“I have never seen anything like that. And I don’t think it’s funny,”

Now, of course, it really is funny. I’m sure all the workers felt very bad (not) at the low rating. Obviously the manager didn’t take the customer feedback seriously either and decided to make a joke out of it, thus downplaying the crappy service of the USPS.

This is funny on so many levels, I have a headache.

No wait, I just have to need a bowel movement.