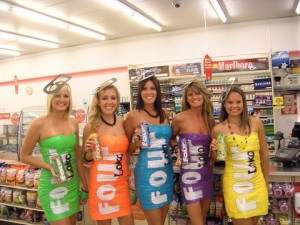 In case you haven’t been keeping up with your local college campus craze, there are some new drinks that the college kids are pouring down their gullets.

Four Loko, Joose, Sparks, are all different brands of alcoholic energy drinks. Often referred to as “black-out-in-a-can” or “liquid cocaine” the drinks are hugely popular with binge drinkers – aka college students.

The drinks come in 23.5 oz. cans and has 12 percent alcohol with caffeine, taurine, guarana added along with  660 calories per friggin’ can.

Colleges are freaking out over this threat to human-kind.

It really is the best of both worlds, one can drink and not feel the effects until way later.

Now the drink is being banned by states all across the nation. The latest is my home state of Michigan. The state liquor commissioner sounded the alarm because some kinds in Washington state drank Four Loko and got some sore tummies and had to be hospitalized. Wait? Washington? So Michigan bans the drink?

We blame fast food restaurants for making us fat, we blame headphone companies for damaging our ears, and now, Four Loko is the unfortunate company being blamed for irresponsible college kids who can’t handle their alcohol and whine and complain about it. As an individual, you are responsible for what you choose to put in your body. If you are unsure as to what a product contains and you have any concerns regarding that product, you should look at the nutrition facts on the back of the can before you ingest it.

I have heard that the last election was getting gummit out of our lives.  Whuck?

Looks like cigarettes will remain the only product when used as directed can make you sick – or kill you.

Still no word about imported Four Loko. It still may be legal to have and consume. If Ohio was smart, they would put a big tax on the drinks and sell them to Michiganders crossing the border.

Kind of like the olden days, when 18-year-old Michigan kids could cross into Ohio and drink low-alcohol beer. Far from the “insta-drunk” of Four Loko, drinking 3.2 beer just means you spent a lot of time peeing.