Bill Gates is a prick.

I have used a PC almost exclusively the past three years. I have five PCs:

Most of the cool stuff happening on the web just wasn’t happening with the Mac and Safari.

So I gave up and joined the great unwashed and started using Windows.

Dropping Internet Explorer was the only change I was capable of to get away from Microsoft. Windows is just fundamentally flawed and purposefully impossible to tweak to get top performance.

The one PC I used most often has finally ground me down to dust with its slowness. I have done every maintenance known to humankind. All. of. them. Except a complete reinstall. I refuse to do a total wipe of Bill Gate’s Asshole computer.

I maxed out the memory, I upgraded my internet connection. I bought a new wireless router.

I even paid for some “speed-em-up” programs: RegistryCleaner and SpeedUpMyPC. I set them to do maintenance every friggin’ night. No matter.

Page loads are painfully slow. Even email and RSS takes way too many seconds to load. I’m sick of watching the sands through the hourglass or the spinning balls or rotating gradient.

But yet look at all the processes that are running! And WTF does all that junk mean? And why do I even need to see it? Because programs regularly freeze and Ctrl-Alt-Del brings this up to free me to lose everything at start again! 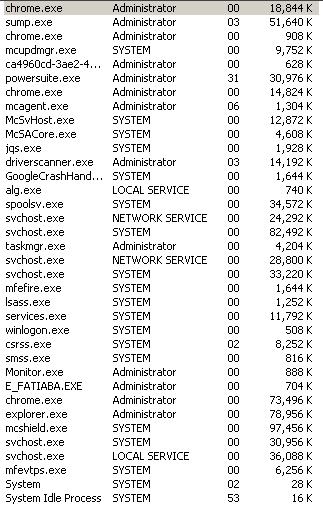 sump.exe? 51K to pump out the shit Bill Gates is dumping on my drive?

Do I really need svchost.exe to be running in six different places?

After three years, you would think I would know, right?

Last night was the last straw. I wanted to hook up a web cam for the Giant Media Switchover that was going to happen this weekend. St. Todd DeCubbville is my remote tech support while I put new flat screen into the network of 2 DirecTV boxes, a cable box, a surround sound box, a DVD box, a Blu-Ray DVD box, and the computer to stream video and surf the web on BATV (which I never do.)

He said a web cam would be nice.

No problemo. The laptop has Vista with a built in cam, adding another cam should be a cake-walk. Just plug it it, find it and launch it.

I can hear you chuckling already.

Of course, I had to download a new driver and install it. That took an hour and then Windows didn’t put anything anywhere that told me I was ready to stream video. UStream.tv told me after I used their help section. UStream.tv! told me how to access the cam. Not Microsoft. UStream.

I kept remembering how nice Mac plugs and plays.

I regularly fired up the G4 just to keep things updated. Usually, it was only Safari and iTunes that upgraded. Nice.

I’m pretty sure Bill Gates sends something every night to the PCs to “upgrade” them.

Rather than face another day of extreme frustration. I fired up the Mac. Pages loaded quickly, email and RSS reading just flew by.

I’m back on the information superhighway after three years of plowing along in a field of manure.

Going back to Mac was nothing. It’s like I never left. Except for remembering that now its Command V or P rather than Ctrl V or P, my Mac still loves me.