Technically, one is Mary Ellen and the other is Maryellen. Or as Maryellen says: Mary space Ellen and Mary no-space ellen. 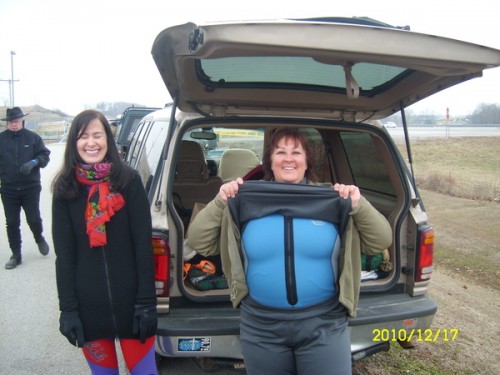 Baby-boomer Maryellen was proud to flash her cold weather gear. Xer Mary Ellen on the other hand was a little mortified.

Okay, so I can’t help it! I was so proud of my new Ultra Farmer Jane wetsuit that I had to show it off. And I forget sometimes that I’m around a bunch of MEN!!!!

This was the second cold-weather kayaking outing for the group. The first was the Saturday after Thanksgiving. Twelve hardy (fool-hardy?) souls paddled around a small lake for a few hours to shake off the Turkeyness. In the case of a few, they will never be able to shake the Turkeyness. (Looking at you Kenny.)

Saturday was the second cold-weather outing (ignore the dates stamp on the photo) and it was a four-five hour trip on moving water. The air temperature was below freezing when they put-in and maybe tipped a few degrees above freezing when the sun broke through the overcast around noon.

I happened to be wandering around with Oliver when the sun came out and a very fleeting thought went through my head: It wouldn’t be half-bad to be on the river now.

And for those few minutes I was right. Then reality set in and I remembered that for two hours before noon and for two hours after noon, they were still paddling.

My yak and I are truly fair weather fans. Especially when I learned three yakers took the polar-bear plunge inadvertently.

Flash: I’ll see you in the spring Maryellen, will you recreate the picture? 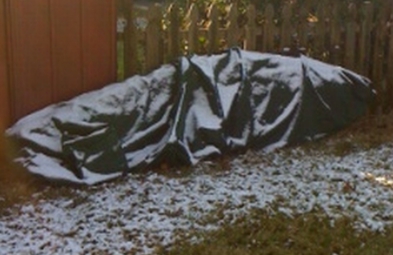