I was a big fan of Deadwood and the gritty (no pun intended) realism that was probably as historically inaccurate as Gunsmoke. The Coen Brothers’ True Grit has that same sense of down-and-dirty outlaw west, but with one fascinating exception (more on that later.)

The Coen Brothers have made some of my most favorite movies:

(Apparently I the only one that didn’t “get” The Big Lebowski.)

No surprise that from the opening scene until the closing scene, True Grit was  highly entertaining, unusual, funny and suspenseful and touching.  It is the best Coen Bros. film to date. 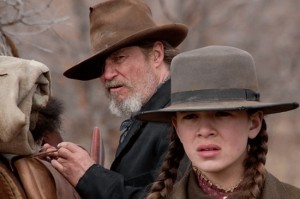 We debated after the film ended of  the real age of Hailee Steinfeld, who plays the 14-year-old Mattie Ross who is hell-bent to find and exact revenge for the killer of her father. I was positive she was probably a 20-21 year old playing the younger character. Nancy said she thought she was playing her true age.

Nancy was right, which makes her performance even more outstanding. An Oscar-nomination is waiting young Hailee.

Bridges was not reluctant to heap praise on is co-star

“What a tough, challenging role for a seasoned actor. All that dialogue, kind of tricky way of speaking. Thirteen-year-old girl, never been in a movie, and she comes up with that performance. Isn’t that remarkable,”

He reassures us that the performance she created was all hers and not the actions of another actor or director.

Jeff Bridges plays Rooster Cogburn, the US Marshal hired by the crafty Mattie to hunt down the killer Tom Clancy, played by Josh Brolin.

It’s hard to pick which is more repugnant in True Grit: Bridges’ Cogburn or Brolin’s Clancy or any number of other truly repugnant characters in the film.

The most fascinating part of the film was it’s seemingly strict attention to the dialogue.  True Grit’s King’s English dialogue is the direct counterpoint to Deadwood’s vulgarity.

I can only recall one vulgarity in the movie, but I wasn’t counting… but some of the dialogue was real lines from the original book. This made every one of the characters unintentionally humorous, but since all the characters were speaking in this unusual cadence it was not distracting from the story.

Here are some passages from the novel that made it the movie:

One of the best things about True Grit is that all of it is written in that vernacular, the speech of people who, while they may have been illiterate, were raised on readings of Shakespeare and the King James Bible, an English practically devoid of contractions and Latinate words. Portis, the reclusive author of a handful of novels (including Norwood, Masters of Atlantis, Gringoes, and Dog of the South, all of which have devoted cult followings), and a former journalist, supposedly learned the rhythms and cadences of late-19th century Southern speech working on newspaper stories in rural northwest Arkansas. 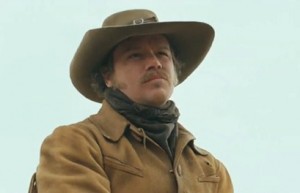 Matt Damon’s supporting role as the Texas Ranger who also was trailing the killer Tom Clancy was good, but not in the same league as Bridges or Steinfeld. Seems that Damon’s biggest challenge was growing the mutton-chop sideburns. He couldn’t. He depended on the make up artists to get it done.

There is the cringe-worthy graphic violence that marks the Coen Brother’s style, but the author of True Grit also allowed for some cringe-worthy humor.

Go see True Grit in the theater, but if you don’t make it, be sure you put it in your Netflix queue. Watching these outstanding performances is not diminished by a smaller screen.