I got an offer of a free month of Netflix.
Free.
Love Free.

If you have invested in Netflix (NFLX) Sell. And not because some Warren Buffet wannabee says sell. Sell because some cold, couch-potato geezer says…

VOD  (Video on Demand) is a bad product. Netflix is the world-wide leader in bad product distribution.

Video on Demand is way over-rated. The stuff that’s available for immediate streaming is old. Unless you really are into the classics and enjoy watching Jaws or The Godfather over and over and over. (Which I do, but I bought the DVDs.)

BTW: The Tivo was unavailable because the cable from the BATV to the satellite receiver was borked. Since the BATV is permanently screwed to the wall, that cable won’t replaced. 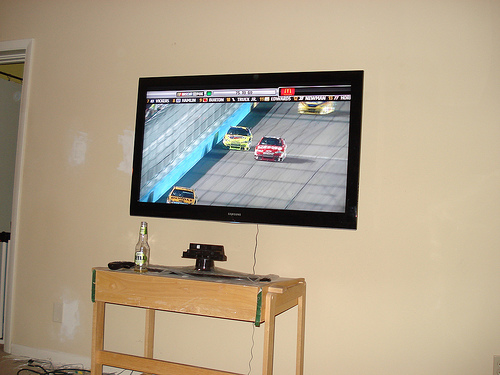 (above: BATV screwed to wall)

This has since been remedied with a work-around thanks to St. Todd DeCubbville.

Netflix hit me with the offer when I was vulnerable, cold and lazy.

First, had a hard time filling up my queue for DVD sby mail. I know there were movies out this summer that we said we would wait until they showed up on Showtime or we could rent them. But scrolling and scrolling and scrolling through endless movie titles and descriptions was frustrating. I finally threw in six movies just to move on.

What I really wanted live streaming Video on Demand. I wanted to watch a movie NOW.

Talk about a bunch of crap. Here, let me show you! Go to Netflix and get your free month.

So there’s the point. VOD has old crap, the new movies are on Showtime BEFORE they are available on Netflix. Showtime is part of our DirecTV satellite package.

When our DirecTV satellite and Tivo came back to us, there was the thrill – thrill I tell you – to find four or five episodes each of the television programs that we had missed:

Yeah, as cable and satellite television gets better, and it is, Netflix is a dying business. But $113.49 to  watch a few channels? I think I need to think.

I think that Netflix investors will be in for a shock if the company’s subscriber growth or Wall Street revenue projections fall short. Investors would be wise to start trimming their position or buy some protection in case Wall Street’s darling tumbles.

This the perfect case of Wall Street touting something they know nothing about.