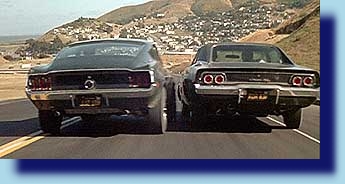 Bullitt was the movie that launched a thousand, maybe even a bazillion car chases.

On the streets of the cities in the U.S.  it was Mustang vs. Camaro vs. Charger. The movie grabbed the audience…

9 minute, 42 second testosterone overload through the precipitous streets of San Francisco — was still enough to ensure that “Bullitt” would become a classic.

Bullitt was also the first car chase  done with live natural sound (some sound was added later as needed eg: tire squeal (and it’ obvious in the chase.) The Mustang rear end was blown as one of the stunt drivers was cranking through the gears to be added to the soundtrack.

McQueen thought he was good enough to do the stunt driving himself.

He wasn’t, Bud Elkins, the driver who did most of the driving said:

“He overshot a turn, smoked the tires and everything. It’s in the film. When Steve did that, it wasn’t on purpose. He goofed up, and they said, ‘that’s it, get him out of the car’.

The cars were basically stock, the suspension was hopped up on both, and McQueen wanted the mag wheels because he wanted his Mustang to look cool. In real life the Charger ran the wheels off the Mustang on the test tracks.

Get this, and imagine trying to film this scene today… there were only two cops on the scene! If you want to know about the chase with photos of the streets then and recently, this site has a good wrap-up.

Bonus points: how many cars were involved in the chase?

Bonus: Three (there was a camera car to grab the Bullit car chase classic of course!)

To a car nut, I would own any one of the vehicles shown in this chase scene: parked or driven. Even the street-car and the Schlitz Beer Truck.