BTW: I already have my typo-of-the-year for 2011.
I referred to trilling her “hours”… what a dope…

Anyway, I have my typo-of-the-year, so you can have your Holy Shit moment of the year…

The National Geographic has released pictures of a vast cave system in Vietnam. 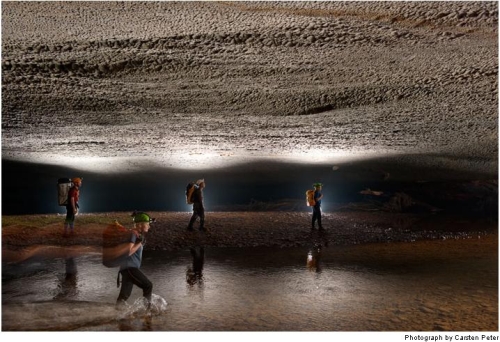 The National Geographic is quick to label it the largest cave in the world.

When Howard and Deb first saw these enormous spaces, they felt certain they had discovered the largest cave in the world—and they might be right.

Largest. Not longest. That still is the domain of Mammoth Cave just up the road. Mammoth Cave is 367 miles long – they think! Last time I read, some expert cavers at the local university were in a hole near Lexington, Kentucky and speculate that it’s connected to Mammoth Cave. Lexington is about 130 miles from Mammoth Cave.

But how cool would it be if the Vietnam Cave and the Kentucky Cave had a connection? The hole to China that every kid dreams of comes true!

Can you say underground railway?

Drop some moonshine in this end and by the time it passes the earth’s core, it’s distilled in to fine Kentucky Bourbon. Drop a chunk of coal from Eastern Kentucky and out comes diamonds in Vietnam. Drop tobacco in here and all of Vietnam can puff away from the resulting smoke.

Drop some rice in the Vietnam end and by the time it reaches Kentucky, it’s cooked rice. Woo-hoo.