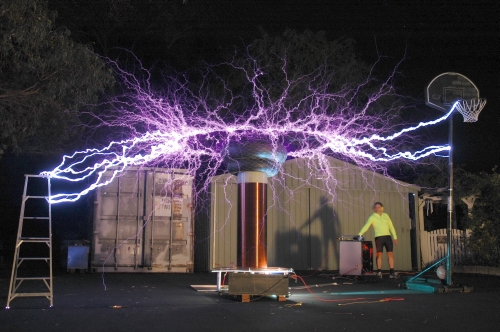 Shane, at Creative Copy Challenge says this is the toughest list of words he as published. Since he’s done 110 lists, that’s saying a lot.

Evil professional writer, Holly Jahangiri, is having a “procedure” and didn’t want everybody to get all “pink and smarmy” so she took it out on her list.

Oh, there are rules and stuff, so you might want to visit CCC before you begin.

Eleemosynary – Of, relating to, or dependent on charity; gratuitous.
Fecund – Capable of producing offspring or vegetation; fruitful; Marked by intellectual productivity
Taphephobia – pathological fear of being buried alive.
Panoptic – taking in all parts, aspects, etc., in a single view; all-embracing a panoptic survey.
Tesla coil – An air-core transformer that is used as a source of high-frequency power, as for x-ray tubes.
Verve – Energy and enthusiasm in the expression of ideas; Vitality; liveliness
Canid – Any of various widely distributed carnivorous mammals of the family Canidae, which includes the foxes, wolves, dogs, jackals, and coyotes.
Semaphore – A visual signaling apparatus with flags, lights, or mechanically moving arms, as one used on a railroad.
Wisp – A small bunch or bundle, as of straw, hair, or grass.
Aegis – Protection; Sponsorship; patronage;