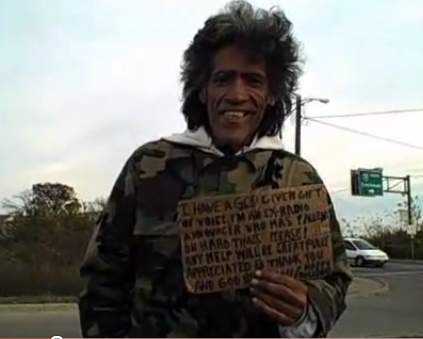 Yup, I was as amazed as you the first time I heard the classic FM radio voice come out of Ted Williams scruffy, meth-mouth.

1. I hope this isn’t a hoax perpetrated by some radio station.  I’m still not convinced this might be the case. The only thing that keeps from yelling “hoooooooooax” is the guy’s meth mouth. But even that can be faked with some good fakery. I’m guessing that since the guy is making television appearances and getting some close scrutiny that he is probably a for real crack-addled bum that got lucky.

2. This guy wasn’t trying very hard to get work. He does voice-over for crying out loud. Pick up a damn phone! Here are the offers he has since being “discovered”:

“I really, really want to get this guy in a seat for an audition,” Kevin McLoughlin, NFL Films’ director of post production, told the Daily News. “When I first heard about it, I was like, ‘Good voices are a dime a dozen.’ When the voice hit me (on video clip), I said, ‘I’ve got to get this guy an audition. This guy deserves a second chance.'”

When you have the “golden voice” like Ted Williams has, it can’t be that tough to find some voice work – even in Columbus, Ohio. And you know, a couple phone calls to some voice agents in Los Angeles would have gotten this guy work in a heartbeat.

He really wasn’t trying very hard. And don’t whine about his crack-addled brain on drugs being fried.  The guy sounds pretty damn lucid in the interviews. He knows who Susan Boyle is, fer cryin’ out loud. He’s been sober for 2 1/2 years!

This kind of story makes me sad for all the plain-Janes and Joe Schmoes that are standing on the street corners begging like Ted Williams and incurring the wrath of passers-by.

It makes me sad for those people that standing in line for minimum-wage jobs with no benefits while drawing unemployment benefits that probably will end soon.

Ted Williams has set back the work ethic of every down-and-out schlub in America. Luckily, they don’t have access to any media and don’t have a clue that Ted Williams is even out there.