Ted Williams, the new hero of the American television media, has a rap sheet – including felonies – that would cause any smart employers to not even let him in the door.

Instead, the crack addled Golden Voice is getting tons of job offers and freebies without trying very hard.

I love that finally The Smoking Gun is doing the work that used to fall to mainstream media. They have looked into Ted Williams background, and as one would expect they are finding: 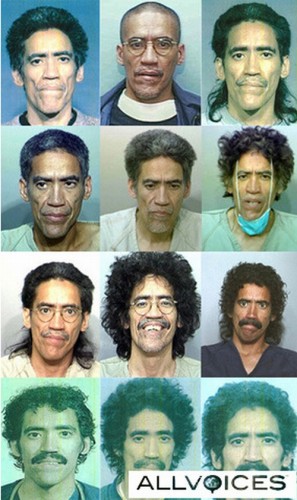 For twenty years – 20 – the man has been committing hard crimes. He just didn’t fall on hard times recently. Those hard times have come over two decades!

One Columbus, Ohio, businessman (where Williams hung around)  told cops that Williams and a woman were “refusing to leave the business property” and had become an “ongoing problem” for the business, according to a police report.

“gets picked up and dropped off in the parking lot by various and numerous males in different vehicles. The management had repeatedly asked the two suspects to stay off the property and have been cussed and yelled at by the suspects for their effort.”

The business owner he has seen Williams stealing items from cars parked by customers at Lowe’s.

“He’s basically been a thief for the past two years,”

What a fraud. What a loser. What a world. The Man With The Golden Felony is now an inspiration for South Florida homeless.

Dennis King, an aspiring economist, is a convicted felon, sleeps on sidewalks near Biscayne Boulevard, and says he has a plan to reduce the deficit and to help Haiti.

“The name of my organization is called ‘World Charities,'”

…he told a television station, pointing to a stack of typed and handwritten documents.

Erick Jones, an aspiring musician who lives on the street near the American Airlines Arena, said he knew Williams’ story well. Jones is looking for a break from a musical talent agent. Hey! Too bad there isn’t a reality teevee show about the homeless musicians!

I mentioned that a made-for-teevee-flick was in Ted William’s future.

How ironic that the savior in the movie The Soloist was a newspaper columnist. It was a newspaper “reporter” that gave Ted Williams his break. “Reporter” because he apparently didn’t bother to run a back-ground check to see if Williams really deserved a break.

Oh, and The Soloist is about a man who is mentally ill – not a crack, meth, herion addicted loser bum.

C’mon. I was sick of Ted Williams BEFORE I heard his voice. Now it just pisses me off that he is pulling the wool over most people’s eyes.

You want a story? How about his partially blind wife who raised Ted Williams’ kids – and his druggie girlfriend’s kids too?