I got an email funny from Gayle today which is a geezer rant about gadgets. It starts out kinda slow with the stereo-typical, I’m-a-geezer-therefore-technologically-retarded…

That was before one of my grandkids hooked me up for Tweeter, Tweetree, Twhirl, Twitterfon, Tweetie and Twittererific Tweetdeck, Twitpix and something that sends every message to my cell phone and every other program within the texting world.

The rant rages on about GPS and Bluetooth but says Geezers are capable of handling two gadgets well: teevee remotes and garage door opener. In my case, both still give me a challenge.

It ends with a funny line:

“Paper or Plastic?” I just say, “Doesn’t matter to me. I am bi-sacksual.” Then it’s their turn to stare at me with a blank, dumb-assed look. I was recently asked if I tweet. I answered, No, but I do toot a lot.”

I don’t own a cell phone. 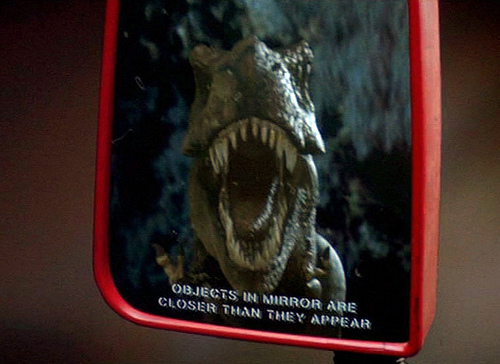 Any Costa Rica tourist without all of the above and knowledge of how to use them is doomed to end up in Jurassic Park with a T-Rex running up their butt.

We rented a cell phone. Seems that AT&T (Always Testy and Terrible) was going to charge Nancy $19 a minute for roaming around Costa Rica. Costa Rica’s monopoly utility ICE (Ee-say) has forced all their customers to embrace GSM, transitioning from PTSD or LSMFT or Mayberry RFD I forget which. The last few holdouts just got their free GSM 3G phones. So we made sure our rental was the GSM 3G just in case the monopoly decided to change their game plan and cause premature disconnection.

(Update: It was a 3G phone which is better than a GSM I am told.) 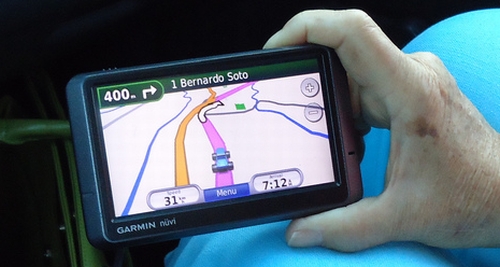 We rented a GPS. (OK, correction, I DO own a GPS, it came with the car, but it’s five years old and can’t be updated and doesn’t offer turn-by-turn directions in Smallburg and sure as hell can’t find a river to yak on.) I got a quick tutorial in the hotel lobby on it’s operation. Easy-peasy. And we loved it. Yes, we made a lot of U-Turns at her insistence, but she was wrong regularly at this one spot too – nobody’s perfect.

We rented a 4WD stick-shift Suzuki Jimny. What’s the female equivalent to a ball-breaker? Ovary Osterizer? Uterus Upender? I was having a blast blowing up and down the mountains throwing shifts like I was Riccardo Patrese. Nancy was not having as much fun as I. For a person who has vertigo, she didn’t complain more than 18-34 times. I was driving like a Tico. 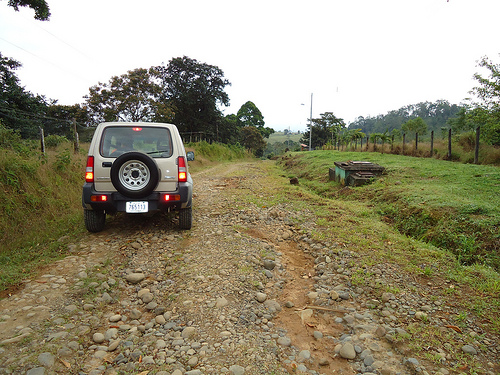 You know what’s exciting about Costa Rica? You can be blasting up and down mountain roads listening to the tires, wife and GPS squeal and the paved road can disappear. Fer Chrissakes, our GPS would warn me of speed bumps and narrow bridges, whuck? It can’t tell when a road changes from asphalt to river bed? (See above “road.”)

When it Costa Rica, make sure you get initialized. GPS, GSM, 4WD. And wouldn’t hurt if you were packing some URL (Uterus Replacement Laces.)