Despite your impressions, I do not hang around with famous people. I am not among the elite in the small community of famous authors.

When confronted by a famous author, I am unlikely to recognize their work or their name. So imagine my chagrin when Jorge Eduardo Arroyo-Pérez tried to sell me his house.

What? You don’t know who Jorge Eduardo Arroyo-Pérez is either?

We need to get out more. 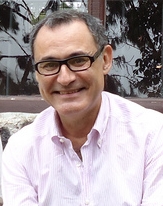 Jorge Eduardo Arroyo-Pérez I read on wiki is a Costa Rican writer, playwright, opinion columnist, essayist, poet and theatre director. He is a true Costa Rican icon. This guy has a list of accomplishments as long as my left arm (which is my longest arm).

He is the only author to receive the National Award in Theatre (Premio Nacional Aquileo J. Echeverría) four times (1996, 2003, 2004 and 2008), the most important recognition given to dramatists in Costa Rica.

More than 30 of his plays have been staged in Costa Rica, Panama, Venezuela, Puerto Rico, Bolivia and Brazil and he has been translated to Portuguese and English. He has ten published books and he is also part of the Drama contemporáneo costarricense. (Contemporary Costa Rican Drama) .

His newspaper columns and specialized magazines add up to hundreds of articles in La Nación newspaper and others and he has been praised as an anthropological journalist. He has also worked as an actor, cultural promoter and producer.

The dude can write.

But his skills as a home-pricer are kinda lacking. 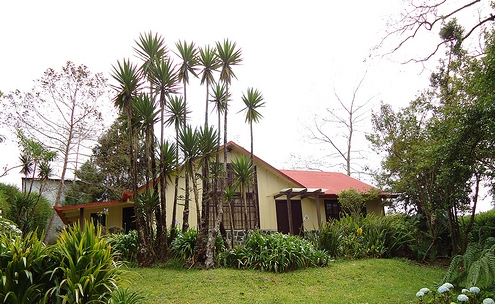 In the states we call this curb appeal. We also call it “pictures lie.” If you have dealt with a real estate agent, you know that they are required to divulge certain information about property.

There are no such laws in Costa Rica. Anybody can be real estate agent. Even famous authors.

This is the Arroyo family vacation cottage that is near the summit of the Poas Volcano. When Jorge wanted to write, he would hole up in this cabin until he had purged his verbage. (Or verbed his pervage.)

He and his assistant Roberto (his translator – even though Jorges spoke and understood English) were acting as real estate agents to sell the family cottage. They learned the tricks of the real estate trade quickly. To a writer, the editing and what is left unwritten are essential, I’ve been told.

Herewith is my version of the real estate musings of Jorge Arroyo:

The cottage is located just a few kilometers from the summit of the Poas Volcano.

The Poas Volcano is at 7000 feet above sea level in a cloud forest where the temperature is never above 60 and sometimes explodes.

Beautiful orchids, strawberries and other exotic flowers are grown nearby in the lush green forests. Some of Costa Rica’s most unusual plants grow here for export around the world.

At the bottom of the volcano is a lake and the bottom of the lake is covered with a layer of liquid sulphur. Acid gases create a phenomenon of acid rain and acid fog, causing damage to surrounding ecosystems and often – irritation of eyes and lungs.

Easy to keep up, cozy, rustic residence is off the main road but convenient to daily necessities.

There is one water faucet at the sink, no hot water, the kitchen sink is made of stone, and there are four electrical outlets total. Down the steep drive, which requires four-wheel drive to maneuver, and up the road is a grocery store and gas station. 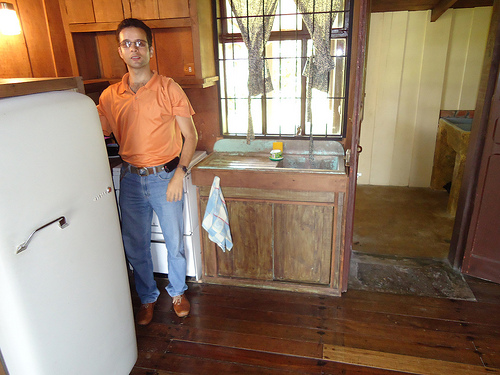 Even as much fun as it would be to have a climatic reason to wander around in a cloud all day and to see Nancy descend the staircase in her finest lingerie, we don’t think this is a place we would like to live. 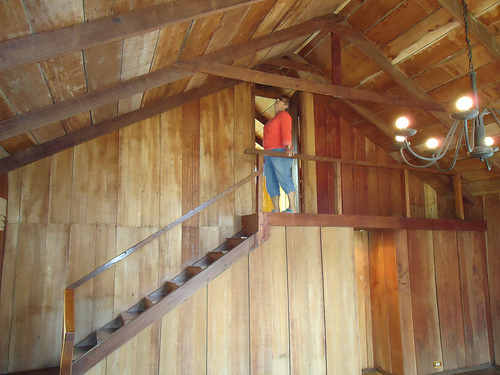 But if I ever want to get serious as a writer, I think I would choose a secluded cabin in a cloud forest. Jorges Arroyo certainly had no distractions as he worked.

I can’t wait to read his novel. I hope it is based in part on his childhood memories of romping around Cottage de Tico Arroyo.

I liked Sr. Arroyo. As with the rest of the Costa Ricans we met he was an unassuming humble man who was embarrassed when I referred to him as famous. I only got the clue when he gave me his business card and his assistant explained that the title “dramaturgo” means playwright. His assistant explained some of Sr. Arroyo’s accomplishments which prompted my immediate gushing.

Maybe I can convince Sr. Arroyo we should spend some time in his cloud cottage. After all just a few hundred feet lower the sun was shining and it was 70 degrees.

We would only use the place to pee and sleep.