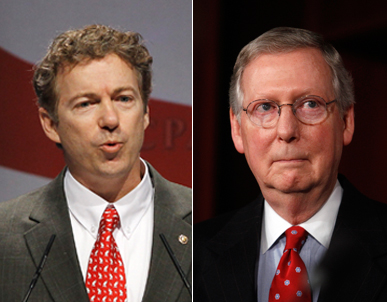 They both think the federal gummit is spending too much money.

“The people who voted for a new direction in November have a five-word response. We don’t have the money.”

Except when it comes to bringing home the pork to Kentucky. Of course Kentucky should continue to get $1.51 back from Washington for every dollar it paid in federal taxes in 2005 (most recent numbers available.)

We deserve it. We have the two most powerful senators in D.C.

A columnist for The Daily Beast has a marvelous idea: Defund Kentucky! Time for our senators to take their hands out of YOUR pocket to benefit Kentucky.

So here’s my two-word response: Defund Kentucky. Cut it off the federal dole. Kentucky is a welfare state to begin with.

A report in the Lexington Herald-Leader says 80 percent of Kentucky’s Medicaid bill is paid by Washington and more than one in five Kentuckians receives a monthly check from the Social Security System, totaling $8.5 billion a year. Washington also spends over $2 billion a year on flood insurance for Kentuckians, $667 million in crop insurance, and $877 million in mortgage insurance.  Plus the Bluegrass State is home to federal facilities ranging from Ft. Knox to the Department of Energy’s Gaseous Diffusion Plant in Paducah.

Kentuckians are addicted to federal spending—they’re the Lindsay Lohan of states, the Charlie Sheen of commonwealths.  Let’s put them in detox.  By trying this experiment in one state we can honor the conservatives’ belief in states’ rights, allowing Kentucky to truly be a laboratory of democracy.

The columnist even suggests that the gold in Ft. Knox be transferred to San Francisco.

Except those of us in the know, realize there is no gold in Ft. Knox.

So here’s the deal: Defund Kentucky of federal dollars and we keep the gold.