One of the sources of pride in Costa Rica – aside from their woman President Chinchilla (4 realz!) is her pledge to get Costa Rica carbon neutral in a decade.

As Treehugger points out, when you list the Top Ten Nations for clean power, the ratio of energy to population weighs heavily on the stats. But in the list of nations, the only other nation that might surprise you is Slovakia. 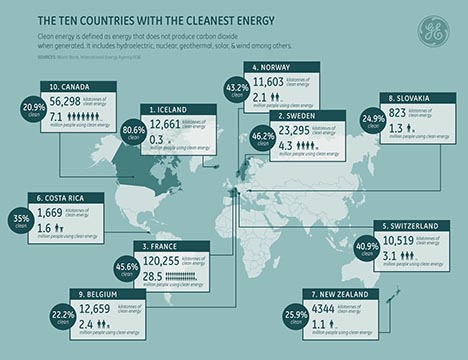 It already produces 90% of its electricity from renewable sources—mostly hydropower, wind and geothermal. Next, it will add solar to the mix, introduce electric trains and buses, move to clean bio-diesel and bio-ethanol fuel for cars, and help reforest its jungles.

Costa Rica is adding train services, they have dedicated bus lanes in San Jose to speedily move commuters. They have a massive tax/duty on cars, so hardly anybody drives a new car, most used cars are small gas misers and pickup  trucks are rare.  Cars have to be inspected annually, those that cannot pass emissions tests are sidelined.