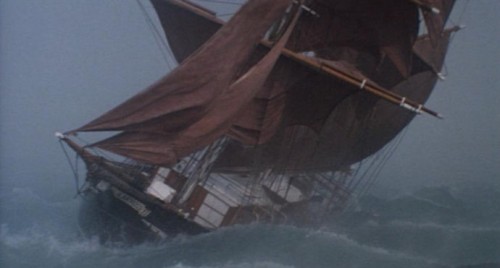 To recap: I have been swimming twice in the river. I have done my version of The Albatross from the movie White Squall. I have rolled over in the waves.

In a video taken at the put in, Scott predicts

There he goes, hauling balls. He’s gonna get an eye opener in a minute. Oh he’s gonna swim.

Scott said I should have a plan to run the river…

Hee. Bomb assin’ – this is my new favorite saying. I may rename by kayak from Rocks or Water to Bomb Assin’

Here is my second swim after “hauling balls…”

I am so dam graceful, even in defeat, I can’t stand it. *chortle* At least we got good video. Here’s how you are supposed to run this section of water.

I was pleased with myself that I didn’t panic. I knew the roll was going to happen, there was no stopping the inevitable, so literally, I had to go with the flow.

I didn’t hear Scott suggest the trying to catch the eddy (as seen on the video.) I was focused on my inner clamness. I missed the eddy and he realized I was pretty helpless and needed to swim to the bank. He didn’t have to tell me twice.

As I reached the closest bank and and stood up in the water, I looked to see Scott rounding a bend with my kayak upside down.

I swore. A lot. Not really mad at anybody, just mad that Scott had to take time to corral my kayak. Rather than enjoying himself, he was helping me out. In the longer video, it shows he really had to work to get my kayak to the side. Really work.

As I stood there cussing, Paul came along and said I might want to get out of the river because of hypothermia. Once on the bank, I  could see that Scott had maneuvered his kayak alongside mine and was waiting in an eddy around the next bend.

By then, I’m done. I mean I am turning it in. I am pooped and mad and don’t want to be a further burden to the guys. I start walking on the bank.  I’m dragging myself and my kayak back to the put in. No doubt about it.

When I reach Scott and my yak and tell them I am throwing in the towel, they both say that the rest of the trip is an easy float. The rapids were done.

Besides, they reveal,  it would be a two hour walk back dragging the kayak. That convinced me to  continue. If not anything, I am lazy.

I pulled my kayak up on the shore to dump it. The paddle gets wedged under the boat and I proceed to lift the kayak full of water onto the paddle shaft.

But I didn’t realize what I had done until I was sitting back in place ready to hit the current. Paul noticed the one paddle end was at a 45 degree angle to the shaft.

Yes, I am in the creek with a broken paddle. Shafted. Hoisted on my own petard. Screwed.

I cuss some more. A lot.

Without a second thought, Paul said he could use the broken paddle and I should take his.  Then he realized he had hand paddles. 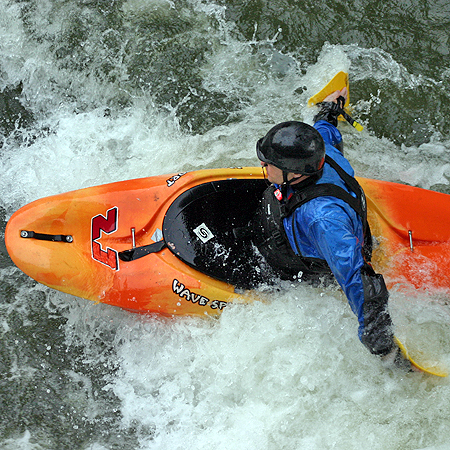 Yeah, the guy was willing to spend the rest of the trip with his hands in the freezing cold water so I could use his paddle.

Didn’t I tell you how nice these guys were? The guy gave me his paddle!

They were right, the rest of the trip was a float – albeit a fast one. We sped along with the current as I listened to them talk about the real whitewater they normally played in. I was hoping they would speculate that perhaps there were some Class 3 rapids we passed through.

Nope, they agreed that these were still Class 2.

When we reached the take out, we all agreed that the wind shift had chilled us pretty well and there would be only one run this day.  But what a day it was. I’m ready to go back – but only when we can read the river gauge and it reads 2 – 2.5 feet.

I was down the creek with a broken paddle once and don’t care to repeat it.

But I’ll be on another river this Saturday.