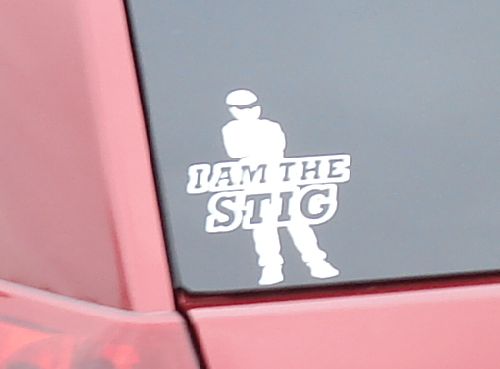 St. Todd deCubbville got me this awesome sticker for the Dodge Magnum Hemi Wagon: I am  The Stig…

Absolutely the best show on teevee today comes from BBC America: Top Gear.  Top Gear is three british fanboys playing about in cars. St. Todd deCubbville got me hooked and now it is your turn.

And that is like saying there will be a wedding in London soon.

Top Gear is most very expensive cars from today and yesterday being abused for our amusement. Top Gear is three giggly men making bad puns and outrageously politically incorrect jokes about being gay. Top Gear is travelogue – an episode had the three men on “motorbikes” doing in 8 days what the Americans could not do in ten years: go from South Vietnam to North Vietnam.  They tried to retrace the route of the three wise men in hugely ostentatious cars. It is the best tee vee production, editing, and writing available to U.S. audiences.

But, most importantly, I am The Stig.

After one or more of the three blokes (it’s hard not to talk like them after a marathon session) has thoroughly blasted around their test track at an obscene pace in a car, they always end by finding out what the car’s true track ability is. For this, they call on a professional race car driver. 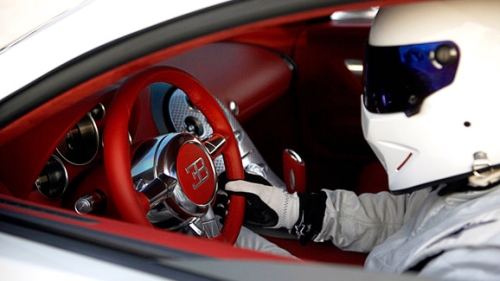 Yes, this is The Stig behind the world’s most expensive and fastest supercar, the Bugatti Veyron. It costs nearly $2 million dollars to buy and probably triple that to build. And The Stig threw it around the track like it was his daily driver.

Many have claimed the title of The Stig.

But few have a decal on the back of their car to confirm their true identity.