Banned by Fox News… originally, now they have buckled and are advertising a website that spells out the End of America (note the link launches a video. If you don’t want to watch the video, “X” out of it and a splash screen asks if you are sure. If you just want to read, click cancel and the entire text with all the graphics is available.)

I watched this video a few weeks ago. I shook me up enough I wanted to know who this Porter Stansberry dude is.  He has laid very low because a Google ™ search doesn’t turn up much aside from links to his newsletters and websites.

I took it with a grain of salt because I’m me. I’m a skeptic by nature and by training.

This guy hit all the hot buttons… and I think sometime in the near future, I will be able to read (or watch) a backgrounder on Porter Stansberry and his End of America.

The Porter Stansberry who said he called the collapse of:

We even helped our subscribers find opportunities to profit from these moves by shorting stocks and buying put options. To my knowledge, no other research firm in the world can match our record of correctly predicting the catastrophe that occurred in 2008.

I can am skeptical of financial newsletter writers who engage in such claims. Since I only read one of his newsletters, I can’t fact-check him. Hopefully somebody will – soon.

Here’s the scary part of his financial forecast that will lead to the End of America:

In short, I believe that we as Americans are about to see a major, major collapse in our national monetary system, and our normal way of life.

…Even if all U.S. citizens were taxed 100% of their income… it would still not be enough to balance the Federal budget! We’d still have to borrow money, just to maintain the status quo.

He lays out a convincing case that soon the U.S. dollar will no longer be the basis of the world transactions.

So whut you scoff?

We owe that debt to the world. We paid for Dubya’s wild tax breaks and his war against Saddam and the invisible Weapons of Mass Destruction by printing trillions of new dollars. We didn’t create new wealth to sustain those tax breaks or raise taxes to pay for the war. Dubya just ordered the Fed to crank out more paper.

We call that paper “Dollars.”

And once our creditors figure out what’s happening, they’re going to be very angry.

I believe they will either completely stop accepting dollars in repayment… or greatly discount the value of these new dollars.

OK, so we blow off this guy as just another crackpot who wants to sell very pricey financial newsletters.

Check out the Feb. 28 issue of Bloomberg Business Week.

The cover story is:

Would you invest in a company that lost $2 trillion last year and has a net worth of negative $44 trillion? 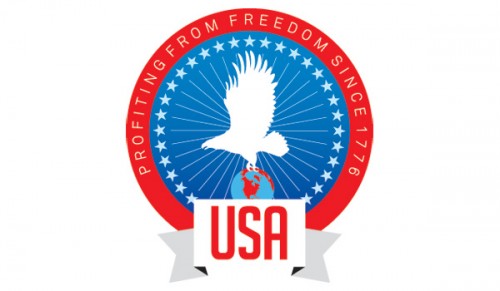 Mary Meeker lays out a similar scenario – with one giant difference. She says USA Inc. is fixable.

You probably don’t think of yourself that way. Citizenship isn’t an investment, it’s a state of being. But by birth or naturalization, every American has more than just an emotional stake in the United States. We have a financial one, too. And by any measure, that stake is at risk.

Who’s Mary Meeker? At least she has a pedigree I can check out… she says in the piece:

I’m the lady whom Barron’s called the Queen of the Net in 1998. Over the past quarter-century I’ve covered tech companies that have created more than 200,000 jobs worldwide, including Apple, Microsoft, Dell (DELL), Amazon.com (AMZN), Google (GOOG), and eBay (EBAY). I worked for Morgan Stanley (MS) from 1991 until November 2010, when I became a partner at the venture capital firm Kleiner Perkins Caufield & Byers.

I don’t pretend to be an expert on government finance, and I’m not interested in taking sides in the political debates over spending and taxes. Pragmatism is my trade, and information is my toolbox. 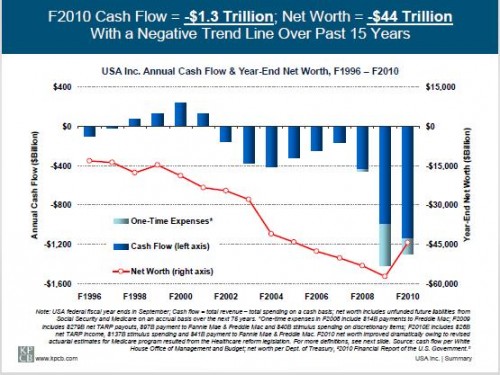 She says the problem of USA Inc. is fixable, but here’s her preface, which sounds to me a lot like the End of America.

Imagine: no Army, Navy, Air Force, Marine Corps, or Coast Guard, no federal courts or prisons, no National Park Service, no Food & Drug Administration, no embassies, no salaries for Congress. That’s what it would take to balance the budget by 2025 and still pay interest on America’s debts, without either raising revenue or reducing entitlement growth. That’s certainly not a recognizable America.

I’m taking steps to avoid the End of America. As soon as that firms up, you’ll be the fourth to know. In the meantime, you might want to consider watching/reading Porter Stansberry’s End of Amercia AND Mary Meekers USA Inc.. (long pdf version is here.)