Remember the iPod? Some of you may still have them kicking around the bottom of your sock drawer next to the CDs. It’s the way most people used to listen to music.

That was before the iPhone. Is the iPod destined to become as useful as the Sony Walkman? Not if the Smith & Nephew guys have anything to say about it. 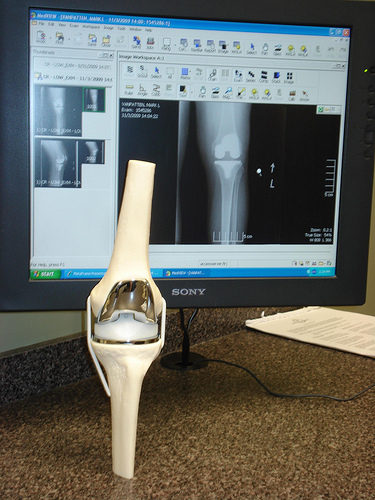 Smith & Nephew – not to be confused with Smith Brothers or Smith and Wesson – make gadgets for the medicos. They have conjured up a way to make a GPS for knee and hip replacement work on an iPod.

The brains behind the gizmo is a system by Brainlab. It’s still unapproved by the FDA, but the cool factor is high. Watching the video, I thought they were unloading a Segway. But, it turns out, that was the receiver for the iPod Dash transmitter.

Which really is better than using an iPhone, with Angry Birds, texting and tweeting…

It’s a race to see which comes to market first, the iPod Knee Navigator or the iTit.