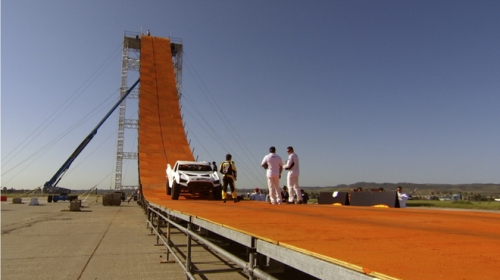 Here are the deets on the stunt, Fearless at the 500…

Fans tuning in for a thirty minute special will get to see Team Hot Wheels™ Yellow Driver take on the 10-story high (100 feet tall) V-Drop® jump inspired by the iconic Hot Wheels® track set in an attempt to make history within the infield of the Indianapolis Motor Speedway.
On Sunday at 3:30 pm ET, fans can tune in to ABC for a 30-minute televised action-packed special that features an inside look at how Hot Wheels® tests their vehicles in the real-world and the “IZOD Presents Hot Wheels Fearless at the 500™” stunt jump.

The Indianapolis 500, which used to be the “greatest spectacle in racing” and now can’t even fill the stands for the race on Memorial Day Weekend, has resorted to a carnival/tractor pull/county fair gimmick.

Fearless at the 500 is an attempt to jump a truck 302 feet at the track in Speedway, Indiana.

I am truly embarrassed for the Indianapolis community and open-wheeled racing in particular.

A dedicated crew of dozens has secretly spent the past few weeks in Southern California building, testing and tweaking a custom-built truck as well as a life-sized version of the Hot Wheels toy track set so many of us enjoyed of us as kids. And if all goes according to spec, the Pro2-style truck (driven by a masked stunt driver) will jump across a gap more than 302 feet in length, breaking the world record for largest leap by a four-wheeled vehicle.

The once proud tradition of the Indianapolis 500 is reduced to this horrible gimmick. The track will be turned into a replica of a kid’s bedroom.

Louie Meyer, Wilbur Shaw, Parnelli Jones, Jim Clark, A.J. Foyt, Al Unser, et al must be spinning in their graves – even the ones that aren’t dead yet.

The 100th running of the Indianapolis 500 could have a tremendous crash before the green flag drops. There might even be a death.

Nice way to start the 100th Anniversary of the Indianapolis 500.
UPDATE:
Nobody died. The stunt set an insignificant record that nobody real cares about. But Hot Wheels spent a bunch of money on a lame-ass stunt backed up by a lame-ass tee vee program.

Daredevil Tanner Foust thrilled the crowd at the Indianapolis 500 on Sunday by producing a spectacular world record distance jump of 332 feet. 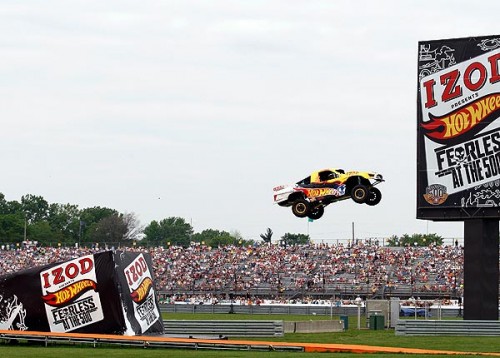 Notice the stands in the background? 1/2 full — as were many of the stands during the Centennial running of the Indianapolis 500.
The side-by-side restarts proved to be the disaster the drivers thought it would be with major wrecks occurring because of the new rule for restarts.
A rookie mistake cost a popular driver a win.
Again, the race turned into a fuel efficiency run to the checker.
And fans were disappointed again.
Will the Indianapolis 500 ever regain it’s luster? Not if they keep doing stupid stunts like the Hot Wheels Fearless at the 500, and insist on race cars that are fuel efficient and keep ignoring drivers.

UPDATE: Here’s the video of Fearless at the 500. Aka Stupid Stunt of the Century.