There is a person who lives in Smallburg who has a well-deserved national reputation. He’s a nice guy. I’ve met him on a couple of occasions and chatted him up. At my house, we refer to him as My Good Friend Gary. He’s just one of those genuinely nice people who is very good at chatting up the Pope as he is me.

He is everybody’s Good Friend Gary.

God save me from name droppers. 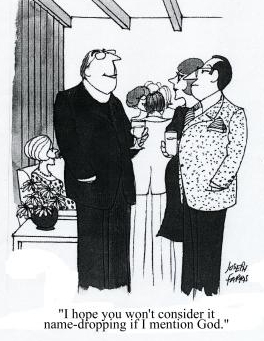 My Good Friend Gary has a large prestigious office. He has a staff of thousands at his beck and call. But apparently he has only one secretary.

She came up to me today and introduced herself as, Blah-Blah (not her real name), President Gary’s secretary. OK, he is a president, but he’s not THE President. And she did call herself “secretary” not “assistant.” I think she has a Hillary complex.

She looked me dead in the sternum (she is short, I am tall) and said:

Which one are you?

I laughed. No seriously, I laughed. And repeated the question back to her…

Which one am I?

Oh, if I was only quick-witted, I would have had such a great comeback for her. Alas and Aflac, I am slow. She thought she insulted me, as she said…

I’m sorry, there are so many people who come through his office, I can’t remember them all.

She then realized she:

Secretary Name Dropper turned on her heels, mentioned a colleague favorably, and walked off.

Gary’s Secretary come to me today.

Which one are you? she did say,

I gave her a clue: it was deja vu!

And apparently this was OK.