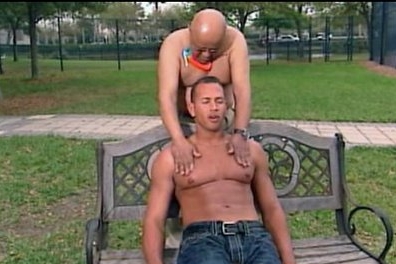 Seems that Sr. Dion fancies himself to be “Max” in the book by Jose Canseco “Vindicated” dealing with his steriod use.

Canseco claims “Max” was a steroids dealer he introduced to Alex Rodriguez.

I met Joe/Max while waiting in the customs line. As with most ques, we doubled back a lot and saw many of the same faces in the twenty minutes of shuffling along. A man in front of me was recognized by another line-stander and he introduced him to the young girl with him as “blah blah blah… famous, very famous… blah blah blah.”

Before I could chat up the famous guy, he started chatting up the chick in front of him. So I chatted up the other guy in line ahead of us who explained that Joe Dion was a very famous baseball trainer.

Soon Joe realized he wasn’t leaving the terminal with the young woman and restarted in customs-line shuffle. When I said his friend had busted him as a trainer we started our conversation.

I am SO not a baseball fan, so I asked if he had trained anybody that I would have heard of.

Uh, yeah, I heard of those guys. Oh, so were you in the book? Sez me. I didn’t read it, but it was hard not to hear about it.

Dion told me I should wait and read HIS book to get the true story.

I was the guy in the book. Not by name, but I’m mentioned throughout the book. Just wait until the movie comes out to get the real story. And there will be a movie.

Dion told me he has been a baseball trainer for 30 years. He said he trained Rodriguez for four years when A-Rod was with Seattle. Dion denied Canseco’s account in “Vindicated” that “Max” was a fan of steroids.

That’s really, really funny because I am the one person that hates steroids. I’m against it 100 percent. And, A-Rod, at the time that I trained him — and this I swear to God — was 100 percent against steroids. He was one of the hardest working guys, and most natural guy, that I’ve met in my life. He hated steroids. We talked about it.

After 30 years of training hundreds, if not thousands, of baseball players, Joesph Dion felt compelled to define his personna based on cheating in baseball. I found that a little sad.

Nobody has ever made the connection between Joe Dion and “Max” officially.

Rodriguez hasn’t commented, while Canseco has refused to discuss the identity of “Max.”

Famous/Infamous. Either way, Costa Rica has some interesting people.