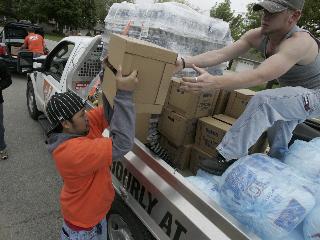 Stop using my federal tax money as an earmark for a special project in another town or state that won’t benefit me. If the state of Kentucky wants to toss some money to Paducah to help with the floods then that’s a state’s proper duty.

But keep the Feds out of disaster relief. Stop asking the U.S. taxpayer to pay for natural disasters.

Dollars to donuts, the same tea-partiers that want Feds out of their life are lining up at the public trough that is Federal disaster relief.

One of my first involvements with a tornado was back in the day. One struck a well-to-do stretch of homes on a lake. My dad didn’t know anybody that lived there, but he sent me with a dump-bed truck to carry debris away. There were dozens of backhoes and trucks and people volunteering for the clean-up. No Feds.

Tornadoes have struck three different homes that I owned at various times. Each time, volunteers – some I didn’t know – showed up with chain saws and trucks and had the debris cleared away within hours.

Insurance covered my structural damages. If people can’t afford insurance, there are agencies in place to help them recover and survive.

OK, so roads and bridges and levees aren’t covered by insurance, but the governors want the Feds to spend money they don’t have on simple clean-up. It doesn’t have to be done today, govs. If it takes a month, it takes a month. If people want it done quicker, let them do it themselves.