In a classic confrontation between a 1963 Olds 88 and a maple tree, the maple tree won.

I crunched a leg and knocked myself silly in a car wreck when I was twenty. 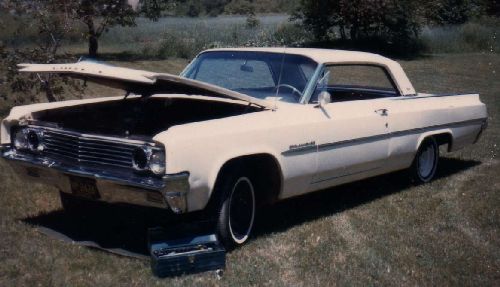 This was the car before the tree customized it much more radically than I could ever imagine. It was My Father’s Oldsmobile, but I got to dress it up for Saturday night dates. (Nancy wasn’t impressed.)

The “fashion” then was to

This is the car that I drove to a trophy winning finish at Ononadaga Dragstrip in Class I/SA (I Stock Automatic.) The Olds had a massive 394 cubic engine but only a two-barrel carb. This gave the car great torque at a low horsepower. Since the classes at the drag races were determined by weight to horsepower, this gave me an advantage – well for that night at least.

Yup, I was a real drag racer with My Father’s Oldsmobile.

Remember the commercial starring The Shat and his daughter Melanie?

I wasn’t racing when I crashed. They make sure there are no trees alongside the dragstrip.  I was on my way to work at the mill.

After the crash, I spent 67 days in the hospital, Sixty miles from my home. My injuries were severe enough that the local hospital decided I needed to be moved to the nearest “teaching” hospital where the experts could try to piece my leg back together and fix my noodle.

I found the bill from the University of Michigan Hospital while packing up some “important papers” my parents kept.

Here are the highlights:  If you want to see the itemized statement (one page) click here.

Not sure my parents got such good deal on the noggin repair however.