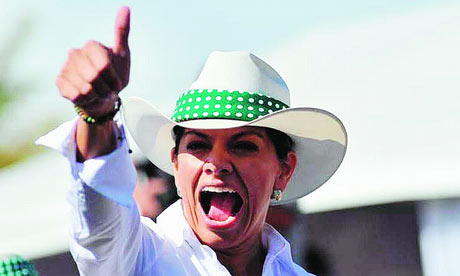 Laura Chinchilla is president of Costa Rica. A first.

She is visiting the United States.

She restores my interest in politics.

Costa Rican President Laura Chinchilla will visit the United States next week in a bid to build on the charm offensive with American investors and media that she kicked off last September.

Chinchilla and a selection of top cabinet members and investment promoters will set off May 14 for San Francisco, California, and then to Washington DC on May 18, meeting along the way with businesses to spark interest in moving their operations to Costa Rica.

“I want to get the message in the minds of investors worldwide that Costa Rica is the best destination for their operations,” Chinchilla said on Tuesday.

Chinchilla needs to convince U.S. companies that Costa Rica, known for its stability, is still a sound investment despite the country’s infrastructure shortcomings, crime problems and her government’s widening deficit that surpassed 5 percent of GDP last year—the highest as a share of economic output in Latin America, according to the Economic Commission for Latin America and the Caribbean (ECLAC).

Yup, the U.S. didn’t nominate or elect Hillary, so I’m now on the Chinchilla oxcart (aka Tico bandwagon.)