…David Brinkley, was also getting ready to race. He was scheduled to participate in the Nat Love Memorial Race for adults. The entry fees will be donated to children’s charities.

The dads once again are having too much fun at an event that is designed for kids.

Dads killed the Soap Box Derby once before.

A kid was caught cheating by adding a magnet to the nose of his car. When the starting plate dropped the slight additional pull to the car was enough to give the kid a unbeatable margin of victory. The kid’s wheels were also doped to be extra slick while turning on the axle.

His adult guardian (not technically a dad) was indicted for deliquency of a minor. The dads had messed up.

Today, in an attempt to eliminate cheating, all the cars must be purchase from the Soap Box Derby company. There are build clinics that must be attended by an adult with a kid. Cars are as close to identical (except for graphics) as possible. The cars are impounded the night before the race, wheels are removed and reassigned on the day of the race. There are heats, it’s no longer a one and done race. It is a great family event.

But this hasn’t stopped the adults from having their Soap Box Derby fun… adults are forming their own division.

Rules are not strict so we can keep it fun. Be inventive!

Be inventive! Have fun! On the front page of the rules: kit cars are strictly prohibited! Kit cars are for kids. 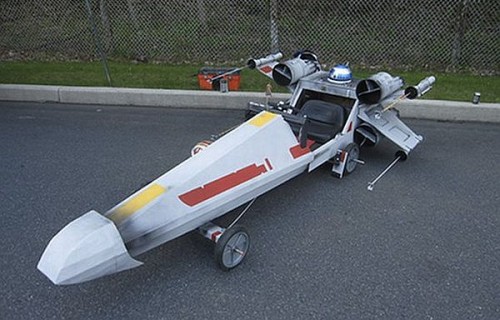 So the dads are building Soap Box Derby cars like this X Wing Fighter from Star Wars.

In Smallburg, adults who work for companies who sponsor the Soap Box Derby cars are allowed to participate in the Adult Oil Can Derby the Thursday afternoon before the Friday/Saturday Soap Box Derby. 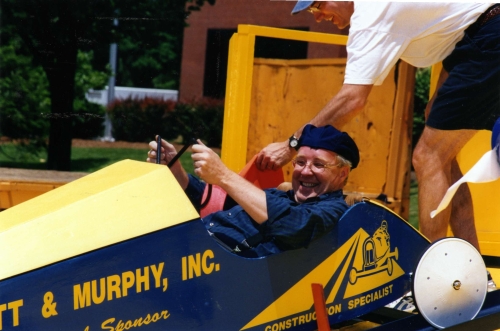 I had as much fun as the rest of the sponsors.

Currently, there are only two cars for the Oil Can Derby.

Adding a Dad’s Division is not a good sign. Hopefully, the guiding forces for the Soap Box Derby will realize this and clamp down on the adult events.